I learned to ride a bike when I was 4 years old. My parents say they just watched as I picked up this kids’ bike, got on it determined to ride, and within no time was doing it. During those early years my bike was part of how I played and got around. My favorite bike was called “The Chopper.” Of course we wore no helmets back then, and we popped wheelies and tore around our neighborhood like there was no tomorrow. In fourth grade I broke my arm riding a bike too big for me when I hit a gravel patch. Once I hit junior high my bike was only for function, not for fun. And when I starting driving a car, I don’t remember biking much at all. After college it seemed that bike rides were more about exercise and riding trails. It wasn’t until I was in my 40s that I even thought about riding my bike to work and using it more in traffic.

Honestly, when I signed up, I thought a three-part course on bicycling was a bit over the top. Come on, how many tips on bicycling could there be?

Along the way, I never got any formal training on bicycle safety. I picked up the idea of using hand signals as being a good idea, and always wore a helmet. I rode my bike without regard to obeying any kind of traffic laws. In fact, I thought it was a “bonus” to be on a bike, because on my bike I didn’t have to wait at red lights, and could take routes that I couldn’t in my car (including the sidewalk). I had been taught that keeping to the side of the road as far as possible was my place in traffic and on the street. I basically relegated my status as a driver of a vehicle on the road to that of a second-class citizen: Do whatever you need to do to protect yourself, drive defensively…or else for sure you’ll get run over!!

I had heard about CyclingSavvy through Karen Karabell, who not only is an instructor but a dear friend. I have been wildly impressed with her bicycling as primary transportation for decades and was aware that she had begun embracing the CyclingSavvy program. But honestly, when I signed up, I thought a three-part course on bicycling was a bit over the top. Come on, how many tips on bicycling could there be?

Right after our first “feature” I knew I was doing something radically different on my bike on the road. It seemed so incredibly foreign. I was sure I would be pissing motorists off left and right as I “blocked” their right to the road.

First I attended the classroom session, “Truth & Techniques of Traffic Cycling”. The evening was a feast of examples, statistics and videos of bicycle safety and traffic cycling. I was shocked how fast three hours flew by. I had no idea there was that much to discuss about how to ride a bike in traffic!

A couple of days later I pedaled early one morning into the designated parking lot for “Train Your Bike”, the parking lot skills session. Since everyone was at different levels in riding skills, I found this part to go slow, but was a lot of fun. And I enjoyed learning alongside my mom, who is in her 70s and still riding her bike for exercise and pleasure.

Around noon the group going on the “Tour of St. Louis” was rounded up and I was paired with a riding buddy. Pretty soon we took off, heading to our designated first stop for lunch. Here is a description of what we were going to do after lunch:

The course includes some of the most intimidating road features (including intersections, interchanges and merges) a cyclist might find in his or her travels. Students travel as a group, stopping to survey and discuss each exercise location. After observing the feature, discussing the traffic dynamics and the best strategy for safe and easy passage, the students ride through individually and regroup at a nearby location. This session is designed to give you the confidence and skills to handle any situation you might encounter while riding your bicycle in the metro St. Louis area.

Immediately I knew I was in for a fun but challenging afternoon. Little did I know that this tour would transform my whole outlook, approach and love for biking! Right after our first “feature” I knew I was doing something radically different on my bike on the road. It seemed so incredibly foreign. I was sure I would be pissing motorists off left and right as I “blocked” their right to the road.

By our third feature I was still hesitating on this new concept of cycling in traffic. Others began voicing how great it felt. One woman said she was “drinking the KoolAid” – meaning that she had fully accepted the message.

I have found a confidence, joy and freedom in bicycling that never would have happened without taking and appreciating the CyclingSavvy program. 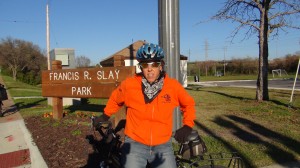 These thoughts didn’t come to me during or right after the workshop. They unfolded in the weeks after I had begun putting the CyclingSavvy principles into practice when riding my bike in traffic. I have found a confidence, joy and freedom in bicycling that never would have happened without taking and appreciating the CyclingSavvy program. I highly recommend anyone who rides a bike, young and old, to get on board with CyclingSavvy. It’s never too late to teach an old dog new tricks. And that goes for law enforcement too! They especially could benefit from the program. Happy and safe cycling! Namaste.