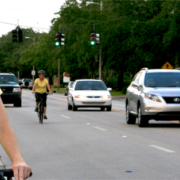 I am a Liberated Cyclist.

Does this look intimidating? These are strong intact males with powerful jaws and sharp teeth. But they are actually just two of my samoyeds playing quietly on a hotel room bed while waiting for me to fix their breakfast, so it is not scary to me in the least. But I spent many years of my life with a fear of dogs.

Does this look intimidating? Well, bicycling on this street looked frightening to me, and it was just one of the things that kept me driving a full size Chevy van the three miles to work, when I really wanted to ride my bike there. I see bicycle riders every day riding this section of Primrose on the sidewalk, riding in the striped off emergency area under the expressway, then through the pedestrian crosswalk, desperately aiming for the miserable bike lane, only to get back on the sidewalk a couple of blocks later when the bike lane disappears to make room for a left turn lane. They look like they are running a gauntlet.

In January of 2009, I emailed Joan Carter, M.A., Bicycle and Pedestrian Coordinator D5, Florida Dept. of Transportation, to whine indignantly about the bike lane on Livingston Street, which would be on my route to work if I survived navigating Primrose. I am embarrassed to quote from my own email:

I drive this section of road usually four times a day. I would love to ride my bicycle to work, but am not sufficiently brave/suicidal to attempt it on weekdays. Most days I observe at least a third of the vehicle drivers using the bike lane as a means to “smooth out” their drive on the brick road. Trash bins are frequently in the bike lane, along with construction vehicles and delivery vans. The lawn care trucks and trailers are the worst. Livingston has heavy traffic, especially during work commute hours, and I don’t see the bicycle lane as being sufficiently well marked or respected.

I continued to drive my van and lament that my bicycle was still gathering dust because Orlando was just too dangerous for cycling.

Ms. Carter responded immediately and graciously, and also forwarded my message to Mighk Wilson, Bicycle and Pedestrian Coordinator for MetroPlan Orlando, who contacted me immediately with suggestions and encouragement. I tried out my planned route to work on a beautiful Sunday morning when there were very few motorists, and found it a physically easy, but nerve-wracking ride. I concluded that it would be too difficult to ride in workday traffic. I continued to drive my van and lament that my bicycle was still gathering dust because Orlando was just too dangerous for cycling. There had to be a way…

I found the Commute Orlando website, and felt like I had hit the jackpot. I read every post, and studied in detail particularly the video of Keri Caffrey riding a simple cruiser bicycle on Orlando streets. Being a skeptic, I wondered if perhaps the presence of another cyclist filming her ride had made the drivers behave better, or if it was because she was a cute girl on a cute yellow bicycle that charmed them, or if she was just exceptionally lucky that day that her risky behavior of riding in traffic didn’t get her killed. It is hard to give up one’s cherished belief in “conventional wisdom” and accept a new paradigm.

I was practicing my interpretation of “vehicular cycling” but it wasn’t fun, and I didn’t see that it would get any better.

I went on Commute Orlando’s inaugural night ride, and enjoyed it, although I was a bit apprehensive. I joined the Commute Orlando Forum, and continued to read. And to question. By October 2009, I finally began my commute to work by bicycle. Most of my friends and coworkers were horrified and concerned for my safety and sanity. Physically, the ride was easy, but I was honked at and yelled at and passed too closely by motorists at times. There were some mornings when I just didn’t feel up to the stress of being the “road warrior” I thought I had to be to bike to work, and I drove the van in feeling disappointed, guilty, and somewhat relieved. I was practicing my interpretation of “vehicular cycling” but it wasn’t fun, and I didn’t see that it would get any better. And riding in the cluttered, intermittent, conflict-ridden bike lanes was certainly no panacea.

In November 2009, I was invited to participate in the pilot class for what would become CyclingSavvy. The classroom session (Truth and Techniques) was interesting and made sense in theory, and the multi-media materials were well presented, but I was not completely convinced it would work for me on the actual road. The morning of bicycle handing skills class (Train Your Bike) was both fun and challenging. I learned useful techniques for handling my bike that I didn’t know, and hadn’t known that I didn’t know. The instructors made it enjoyable, and made sure we were set up to feel safe and to succeed. The afternoon class on the streets (Tour of Orlando) was the best thing ever. The strategy sessions analyzing the traffic patterns and different road features were fascinating. Actually riding in traffic through these road features was nothing short of a revelation. Riding my bike solo through traffic on a heavily traveled section of the dreaded Colonial Drive, while the rest of the class watched, was amazing. And empowering. And I didn’t die!

By practicing the CyclingSavvy techniques I learned, my commute became easy, and so routine that I tried different routes and bicycles. I joined the Florida Bicycle Association. I went on (and thoroughly enjoyed) many group rides, I’ve had fun towing various utility trailers behind my bike, and going places I might not otherwise have gone. I have found a wonderfully interesting, fun, supportive and encouraging group of bike riders through Commute Orlando.

What a difference! I have gradually expanded my cycling forays, and it just gets easier and more enjoyable.

My previous interpretation of “vehicular cycling” had made me feel like I had to fight for my right to space on the road, and the constant conflict was stressful and demoralizing. Cycling Savvy showed me how to read traffic patterns, how to ride confidently and let other road users clearly know my intentions, and how to gracefully integrate myself as part of the flow of traffic. What a difference! I have gradually expanded my cycling forays, and it just gets easier and more enjoyable. The skills I learned in the Cycling Savvy course will be useful to me wherever I go, and I will be forever grateful. 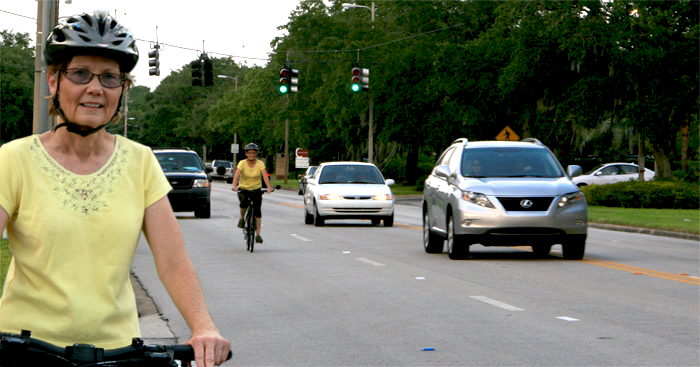 This is Maguire Blvd. Two years ago, I would never have considered riding a bike on this road. Now I don’t think twice about it—day or night. In fact, I prefer it to Primrose.