If I can can make it there, I’ll make it anywhere.

My thoughts exactly as I returned from a four-day vacation in New York City, during which I showed the world that savvy cycling can conquer even the Big Apple.

My eyes were drawn to the cyclists. Lots of them. More than I see in other cities.

At the start, I had no intention of spending ANY time on a bike.

All those four- and six-lane avenues and cross streets?  The traffic?

In the cab from Penn Station to our hotel on the Upper West Side, my eyes were drawn to the cyclists. Lots of them. More than I see in other cities.

I took note of how they rode and saw much of the same behavior I see everywhere.  Running red lights, weaving in and out of lanes, going the wrong way, not yielding to pedestrians.

Cycling here was just like anywhere else. Maybe I’d give it a shot after all. And show ‘em how to do it right!

By Saturday I’d made up my mind to take the plunge. New York has a well-developed bike share system called CitiBike. The phone app makes it easy to purchase one-day passes, find the nearest docking stations and unlock bikes. The price was $12 for a 24-hour pass in which all 30-minute rides are included. If any ride goes over 30 minutes, you’re charged $4 for each additional 15 minutes. No problem, just ride station to station and you avoid the overages.

I started out that morning with a bike from a station just outside my hotel — how ’bout those apples? — and headed straight down Broadway to Midtown.

I controlled a regular travel lane the whole way. This was no problem because traffic was light — although being NYC, there was still traffic. I ran errands here and there, and just had a blast barreling down the avenues and cross streets.

CyclingSavvy etiquette at its finest.

At one point while using the middle lane on Broadway, a transit bus in the lane to my right had its left blinker on. I slowed to a crawl, made eye contact with the driver through the bus’s rearview mirror, and motioned the driver to move into the lane ahead of me. CyclingSavvy etiquette at its finest, if I do say so myself.

I was vaguely aware that NYC has a mandatory bike lane law, but I stayed in the travel lanes anyway. No law obligates me to endanger myself for another road user’s convenience.

That first morning, using regular travel lanes was no problem. Although there are lots of bike lanes in NYC, there are still a lot of big roads without them.

“Yer gonna get yourself killed!”

At one point while heading downtown, a cyclist who stayed in the bike lane passed me. Like every other NYC cyclist I saw, she rode through red lights and generally didn’t look around or signal. Despite that, I kept up with her until I turned onto 42nd street. So much for the advantage of the bike lane.

Some bike lanes are just painted lines on one side of the road, and typically have the dooring problems we know and loathe.

My one mistake involved a “protected” bike lane.

In New York there are also separated bike lanes that go between the curbs and lines of parked cars.

These are worse, because they hide cyclists from drivers. The one mistake I made involved one of these lanes.

I had just undocked a bike and was a little careless in getting out onto the road so I could make the next left. I had to cross the separated bike lane and just as I started onto the road, I saw a car coming.

As I entered the road and made my left turn, I didn’t think it was that close. But as the driver passed me on the cross street, he yelled, “Yer gonna get myself killed!”

I thought this was just the usual plaintive cries of the urban cyclist-hating driver. 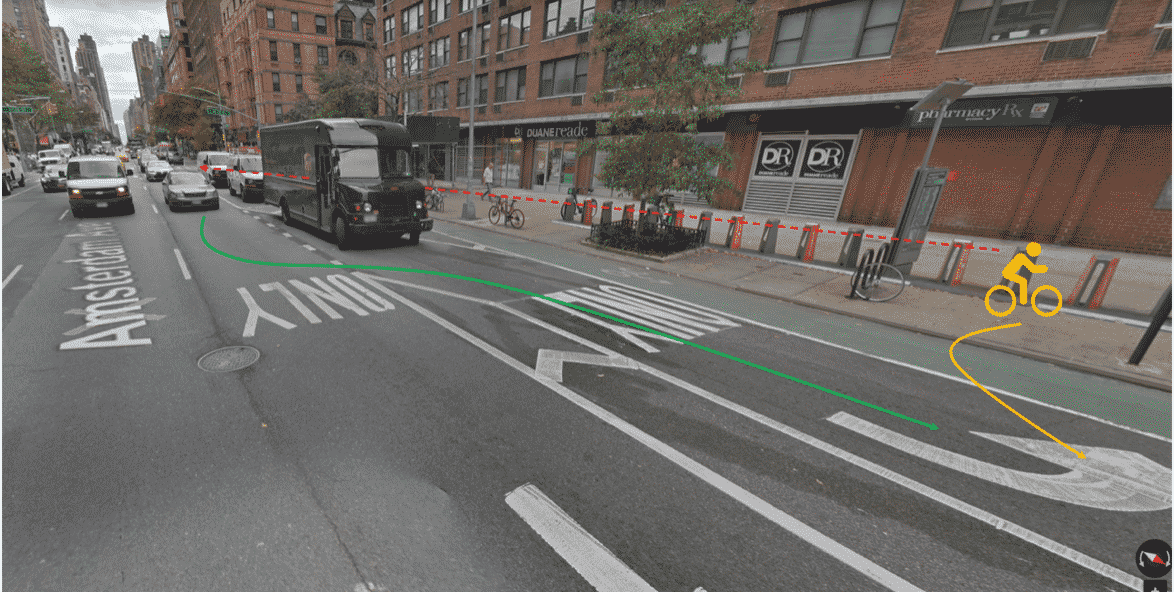 Crossing this bike lane to get to the left turn lane should have been easy, but the parking island that is deliberately designed to form the “protected” bike lane blocks my view of the approaching traffic, thereby making my entrance harder.

But at the next stop light, he explained to me very nicely and calmly that he hadn’t seen me pop onto the street until he was a little too close.

I realized he was right and apologized. Crossing that bike lane to get to the left-turn lane should have been easy. But the parking island that’s been deliberately designed to form a “protected” bike lane blocks my view of approaching traffic, thereby making my entrance harder.

Heated exchanges but never in danger

During my return to my hotel, traffic was much more congested.  NYC’s big avenues have as many as six lanes going in the same direction, all of them being used. 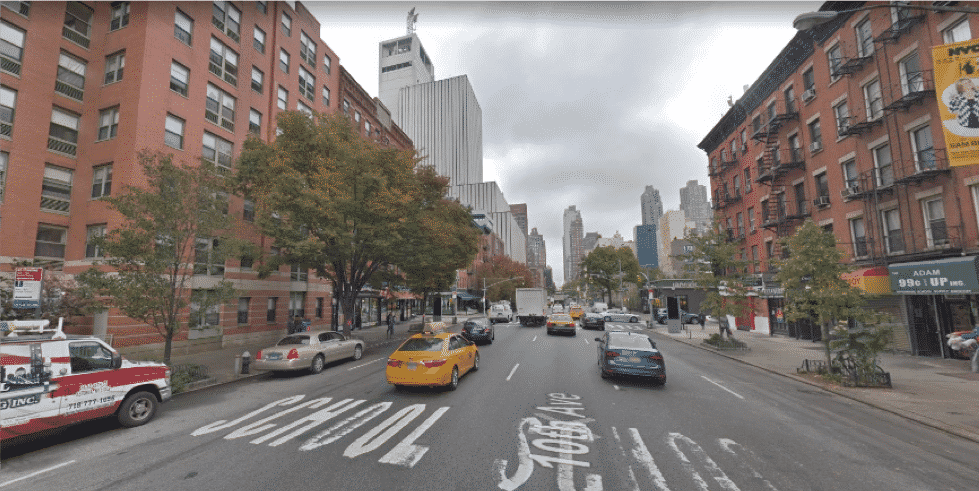 Naturally there are lots of cabs. It was during this ride back that I drew the ire of several of them. One yelled at me to go back where I came from. One called me some name that had the word “head” in it.

Another turned off his engine at a red light so I could hear him telling me to get in the bike lane, whereupon I told him that I wasn’t going over there.

I had zero problems with drivers when there was no bike lane on the road.

Despite these somewhat heated exchanges in close quarters, at no time did I ever feel my life was in danger. Nobody ever made a move to run me off my bike. I was completely in control of my environment and it showed.

It’s a sorry state of affairs that savvy cyclists face the greatest incivility on roads with bike infrastructure.

We understand why it’s safer and easier to use regular travel lanes, but most motorists don’t. I had zero problems with drivers when there was no bike lane on the road.

My behavior and tactics on the bike didn’t change one iota. I always held the lane, looked behind, signaled turns, stopped at stop lights, stopped for pedestrians.

This was no problem for other drivers on the road with me until the moment a bike lane appeared. Then it was OMG!-GET-IN-THE-BIKE-LANE-YOU’RE-GONNA-GET-KILLED-GET-OUTTA-MY-WAY!!!

Strange how that logic works.

I had one funny exchange with a driver while heading up 10th Avenue. As he passed me he yelled, “Hey! You’re breaking the law. You’re not supposed to go over 25 MPH.”

He started laughing and so did I. “No way am I going that fast,” I responded. “But I can. Just watch me!”

We both laughed and waved and went on our way. Adding this to my earlier experience, I thought that maybe New York drivers aren’t as bad as I’d been led to believe.

Why I felt justified not using bike lanes.

New York cyclists, now they’re a different story. During my whole time there, both on and off the bike, I saw all manner of scofflaw behavior, from running red lights to brazenly riding up the bike lane the wrong way.

Here’s why I felt justified not using bike lanes. As I mentioned earlier, no law obligates you to endanger yourself.

NYC bike lane law has a loophole that says you must use a bike lane if it’s available, but not if you feel it’s unsafe for any reason.

My position is that the bike lanes are NEVER safe, because you never know when you’re going to run into wrong-way cyclists. In separated bike lanes, my maneuvering margin was greatly reduced. Not to mention the possibility of coming into conflict with turning traffic at every intersection, both with regular bike lanes and “protected” ones.

Why savvy cyclists prefer riding on the road

We get along much better with drivers, because we’re all following the same rules and we’re all watching out for one another.

At one point when I was near my hotel, I was stopped at a red light in a middle lane with a tour bus behind me (and not giving me any hassle). A mail carrier crossed the street in front of me and said, “You should be in the bike lane. You’re gonna get hurt.”

I told him I wasn’t worried and that the problem with the bike lane is that they’re full of bikers. I didn’t have time to add: Bikers who don’t follow the law.

But right on cue, a cyclist in the bike lane sauntered right through a red light. Point made.

I’m not advocating that you go to NYC and snub your nose at New York’s mandatory bike lane law. I’m certain a large portion of my success was due to the fact that I never crossed paths with New York’s Finest.

If I had, I would have defended my point of view, well aware my efforts would likely have fallen on deaf ears.

Nevertheless, I left New York solid in the knowledge that my CyclingSavvy skills can truly be used anywhere. And I do mean ANYWHERE!!

Help Us Grow!
A slow ride across a high-speed interchange