What in blazes is the Zaveruha Doctrine of Responsibility?

It’s this: A person is fully responsible for how he influences others.  On a bicycle or in any other aspect of life.

An old girlfriend taught me that, in a way that stung at the time, but it stayed with me. It’s a good story.

In the autumn of 1972, I was a feckless college junior.  I had just dropped my life savings on a Motobecane Le Champion racing bike. That bike checked all the boxes: Reynolds 531 tubing! Campagnolo Nuovo Record derailleurs and Campagnolo Nuovo Tipo hubs! Hutchinson sew-up tires!  Stronglight Model 93 cotterless crankset!  Brooks Professional saddle!  I was fit and fast, and loved riding that bike as hard as I could.

One day, I took an impressionable young freshman, Lee Grunes, out for a ride. And I decided to show off. I let loose a mighty sprint on East Possum Hollow Road, seeking the cheap thrill of out-sprinting my inexperienced companion, who was riding a cheaper, heavier, slower bike.

Lee tried to match my sprint. His foot slipped, he lost control, the handlebars went sideways, and he fell. Hard. He writhed on the ground in front of me, in searing pain. He said he’d broken his collarbone.

A passing motorist took us to the college infirmary, where the broken collarbone diagnosis was confirmed.

“You caused that crash.”

I felt sorry for Lee, but it didn’t occur to me to feel any guilt or shame. Until my then-girlfriend, the lovely and elegant Susan Zaveruha, heard what had happened.

“You caused that crash,” she scolded.

And she rubbed my nose in that which I didn’t want to face: that Lee had been unduly influenced by my showing off.

It stung, because she was right.  Lee’s crash was my fault. The Zaveruha Doctrine was born. 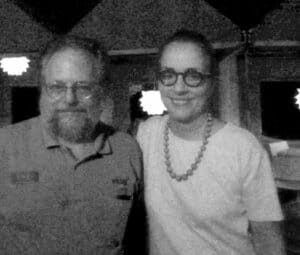 40 years after giving me the scolding I deserved, Susan Zaveruha obligingly posed for a photo. She’s on the right, if it’s not obvious.

A few months later, Susan wisely dumped me. I bet that news makes you smirk.

Lee’s collarbone healed. He got a PhD in physics from Cornell, and had a suitably distinguished career. And I was left with a lesson of responsibility.

The thing that most matters is how I influence others.

What I say or write matters. How I say it matters. My actions matter.

I apply the Zaveruha Doctrine unsparingly to myself and my work, because Susan was right.

In the world of bicycling, writers and advocates who use ad hominem attacks, logical fallacies and diversion tactics to obfuscate the delivery of important safety information?

Editors who withhold information because they don’t want to deal with the topic?

If you advocate for on-road bicycle infrastructure because it’s “better than nothing,” remember Susan: Every coffin corner collision, every broken collarbone from a car door collision — that’s on you.

And my favorite:  You can’t glide past the fact that the coffin corner, the door zone, and other hazards actually do cause human tragedy, and then say:

“Oh, but these facilities will induce so many people to ride bikes that the overall crash rate will go down.”

You can’t have it both ways.

That, my friends, is the Zaveruha Doctrine. We should all adhere to it.

Help Us Grow!
Pragmatic vs. Dogmatic Bike Lane Use

Foolhardy, Confidence-Inspiring, or Oddly Uneventful? You Decide
Scroll to top