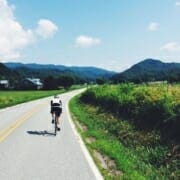 The American Bicycling Education Association‘s mission is not only to educate bicyclists. We want every road user to know how to cooperate.

I drive a car, too, when I have to. Sometimes I cross the double yellow line to overtake a bicyclist. Motorists often must decide whether to pass a bicyclist in a no passing zone.

Let’s say that you are driving a car, approaching a bicyclist from behind on a road with a double yellow centerline. The law in some states says “don’t cross the double yellow.”

In about 26 states, other laws require motorists to give three or more feet of lateral passing clearance from bicyclists. Almost always, the road isn’t wide enough for a motorist to stay on her side of the double-yellow line, give three feet, and overtake a bicyclist.

Should the bicyclist squeeze right as much as possible, so that you in your car can brush by with inches to spare, while staying to the right of the centerline?

Or do you wait in your car behind the bicyclist until the end of the no-passing zone? It sometimes goes on for a very long way, even on a road where you can see far ahead.

Centerline laws are based on an assumption that isn’t true 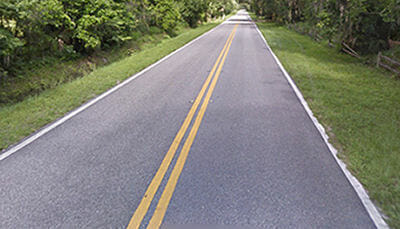 raffic engineering practice with centerlines is based on the assumption that all vehicles travel at or near the posted speed limit. If the vehicle being passed is much slower — a bicycle, farm tractor, or Amish buggy, for example — the passing distance is much shorter. Safe passing is then possible while disregarding the letter of the law.

To use a fancy expression, the double yellow line leads to cognitive dissonance.

The good news: this quandary teaches people to think for themselves. Where I live, in Massachusetts, almost every motorist has come to terms with crossing the double yellow when necessary to pass a bicyclist safely, as in this 45-second video.

Some motorists do take the invitation to cross the double yellow when the sight line ahead is too short for safety. The usual outcome is a brush-by pass, though it can be worse.

And brush-by passes lead to self-reinforcing unsafe bicyclist behavior, when bicyclists conclude that it is safest just to squeeze to the right and hope for the best.

Given the law as is, what should motorists do?

As the video makes clear enough, don’t take up a bicyclist’s invitation to pass when it might not be safe. What you can’t see can hurt you — or more likely, hurt the bicyclist, who gets more than just a brush-by.

Serious crashes are caused by startling bicyclists with a close pass, and by the wind blast from a passing motor vehicle.  Misjudged close passes cause serious collisions.  You don’t want to be responsible for any of those.

Crossing the centerline (whether it’s marked as a double yellow or not) is a common and generally accepted practice. The likelihood of getting a traffic ticket after executing a safe pass is almost zero. A technical violation of the law might be used against you if you do have a crash… but that would be a result of careless passing.

Several states have amended their traffic laws to explicitly allow crossing a double yellow line to pass bicyclists when safe. Bicyclists should support efforts to change the passing law. Most other states have an exception that reads something like this: “This section does not apply when an obstruction exists making it necessary to drive to the left of the center of the highway.” While none of us like to be referred to as an obstruction, it will suffice until the statute can be made more specific.

For more background, you might go to our longer article on the topic.

Also see John Brooking’s article “How to Get Great Passing” in this blog.

And we now have a follow-up post with a bicyclist (me!) who will show a better way to handle the same situation, at the same location in the video.

Help Us Grow!
I Rode a Bicycle on Massachusetts Route 9