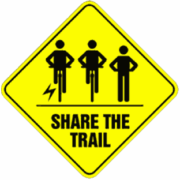 This article is Part Five in the series on e-bikes. Previous articles were Savvy E-Biking To A Car-Free Future, Everyone’s A Racer Now, E-Bikes: Education, Training & The Law, and E-Bike Benefits and Challenges – It’s a Different Machine! – CyclingSavvy. I encourage you to read those articles before continuing with this one. This article will focus on misconceptions, e-bike etiquette, and mixed-group riding (conventional bikes and e-bikes).

As e-bikes have gained popularity, misconceptions have diminished. They still need to be discussed.

Aside from the research, e-bikes allow riders to go farther, faster, longer, and with less effort while having fun. People will want to stay out longer and/or ride more often. That equates to better fitness and calorie burning. Here is a report on an easy e-bike ride I did on the road a while back, demonstrating the fitness and calorie-burning point.

Unfortunately, most e-bike users have not sought out or received the training they need to ride more safely, legally and cooperatively. E-bike etiquette is becoming a hot topic! The cycling community, public, and local authorities – including law enforcement – are receiving complaints of unsafe, illegal, irresponsible, and uncooperative use of e-bikes. Our youth also fall short. Linked here is an example: Manhattan Beach Police to Increase Enforcement on Electric Bike Riders – NBC Los Angeles.

Keep these strategies in mind while riding your e-bike, on- or off-road. Several are CyclingSavvy strategies:

Should e-bikes be allowed in bicycle clubs and/or on group rides? Some clubs have already addressed this issue, for example Petaluma Wheelmen Cycling Club – Electric Bike Policy, Santa Rosa Cycling Club – SRCC Electric Bicycle Policy, and Charles River Wheelers Welcomes E-Bikes!. The League of American Bicyclists will insure only users of Class 1 and Class 3 e-bikes (both are pedal-assist only), during League courses and League-affiliated club rides.

Each bicycle club, and group ride leaders, must answer these questions:

Karen Karabell, CyclingSavvy, and I hope you have enjoyed and benefited from this series on e-bikes! Who knows, maybe some additional articles on e-bikes may pop up in the future.

Clint is a CyclingSavvy Instructor Candidate. He is a retired law enforcement officer after a 24-year career including time with the Los Angeles County Sheriff’s and Riverside Community College District Police Departments. While at RCCDPD, he was a bike officer for 23 years.

He is a 26-year active and certified California Bike Patrol Instructor and currently instructs Bike Patrol Courses for the Riverside County Sheriff’s Department. He has been an IPMBA (International Police Mountain Bike Association) member since 1994 and is a former instructor.

Clint owns two e-bikes and runs errands, commutes, races, teaches, and patrols (at his church) on them. At the 2018 and 2019 IPMBA conferences, he presented/co-presented e-bike workshops to instructors and general attendees. He has also presented e-bike seminars and presentations for local bicycle clubs, Chicago Area Bicycle Dealers’ Association Expos, and the Florida Bicycle Association. He has authored e-bike-related articles for CyclingSavvy, Bicycle Retailer and Industry News, IPMBA, and officer.com.