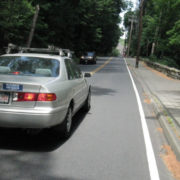 I am riding on a two-lane road, leaving room for motorists to pass — releasing. This is a semi-rural road with a residential driveway here and there. Almost all traffic continues straight through, and I have made the considered decision to allow motorists to pass. Illegal turns are rare here. But now a car pulls ahead of me and stops, just short of a driveway on the right.

Almost every time this happens, the driver thinks that allowing me to pass on the right does me a favor.

The everyday rules of the road and the traffic law are clear: it’s no favor. Right turns from the middle of the road are illegal turns. The driver should slow and follow me for the few seconds it takes me to get past the driveway, merge to the right edge of the road, and then turn right. (It’s MGL Ch. 89 § 2 and 90 § 14 in my home state, Massachusetts, in case you care to look)

I want to encourage drivers to do the right thing. How do I handle this?

Traffic is a dance of large objects with limited maneuverability. But with my forward view and a rear-view mirror, I can interact smoothly with motorists as long as they are predictable. Rules of the road make for smooth and cooperative interaction, as long as everyone is obeying them. If a driver just slows to follow me for a couple of seconds, I can pass the driveway and the driver can then turn right. This is the way things are supposed to work. It even takes less time.

It’s actually easier to anticipate an unsignalled and illegal right turns when the speed of passing traffic is high, because drivers then have to slow. before turning right. I check my rear-view mirror and when one slows, I I merge to lane-control position, or make the “don’t pass” signal: arm outstretched, palm facing to the rear. If speeds are slow, a car going little faster than me could turn right and cut me off without warning, so I need to control the lane whenever approaching a driveway.

But sometimes I miss the cue and a driver will invite me to pass on the right. I have to admit, I haven’t always handled this well. Bicycling gets me into “the zone” a so-called flow experience, living entirely in the present. That is one of the joys of bicycling for me. But I am also keyed up with the exercise, and it can be jarring when my flow experience is interrupted.

When a driver pulls up just ahead of me and stops, what do I do?

I also stop. (I have seen bicyclists shoot through on the right. Don’t – a misunderstanding could be injurious.) I need to resist the temptation to have a conversation with the driver, and that is where I have failed at times. I am not in the best mood when my flow has been broken. Here in New England, people drive with the windows closed except on the few blessed days with fine weather. And often then too. So, I have both the incentive and the need to raise my voice,. That doesn’t make for a good conversation. Drivers can get offended that I don’t appreciate their nice favor.

What is better? If I’m sure that the driver isn’t waiting to turn left, I could pass on the left. That confounds the driver’s expectations and sends the lesson: “I don’t pass on the right.” Sometimes I have to back up first, because the car has stopped next to me. But just staying stopped sends a stronger message.If a long vehicle has stopped next to me, I am in danger and I need to get out of there.

So, to sum up, you face an uncertain situation when almost almost all traffic is going straight through and you want to let it pass, but there is a driveway on the right. The best I can say is to have a mirror, use it, check it, anticipate and forestall illegal turns when you see them about to happen. Use lane control and the “do not pass” signal. When it happens anyway, stop, don’t say anything. The longer this continues, the more mind-bending it is for the driver. Or if it will be safe, you could pass on the left with a friendly wave. Better only to confound the driver’s expectation than to try to start a conversation!