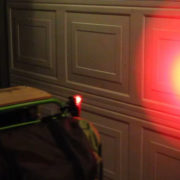 We are now in the time of short days and long nights, and so it’s a good time to talk about bicycle lights.

And there’s good news. Thanks to efficient light-emitting diodes (LEDs), bicycle lights can be bright while drawing meager power from a small battery or generator.

Even better news — they won’t draw all the cash out of your wallet.

The trend can go to excess. Some of today’s bicycle headlights have product names like “Atomic”, and I kid you not, “Blinder” — only too true. Brighter, brighter, brighter… 200, 400, 1000 lumens. (The lumen is a measure of light output.)

The lumen war reminds me of the mid-20th-century horsepower race among big American cars. As in “my car is better than yours because it has a V8 engine with more horsepower!”

Lumens count light in every direction, but it matters in which direction the light goes. Any bicycle headlight bright enough to light your way should have a special beam pattern, like a car headlight, for at least four reasons:

A good beam pattern looks more or less like this, if you shine the light at a wall:

Still, many bicycle headlights being sold in the USA have a round beam pattern like the one shown below. These headlights cannot illuminate the riding surface evenly without glaring at eye level and above.These lights are appropriate only for off-road riding, and even then not when there is oncoming traffic.. Some lights do let you switch beam patterns.

Any bicycle headlight should throw some light to the sides, to render the bicyclist visible to cross traffic.

For a shaped beam to work correctly, the cutoff needs to be just below horizontal. Check out this video of the beam from my headlight as I walk my bicycle toward my garage. The flat top of the beam slowly rises up the garage door.

A taillight’s beam pattern is less critical. Drivers who can approach at speed will be directly behind you. Aim a taillight level and directly to the rear. As the video shows, you test aim by rolling the bicycle away from a wall. The center of the beam should stay in the same place. The taillight should throw light to the sides too, but need not be as bright there. The headlight and any side-facing reflective material will also be visible from the sides.

What about flashing mode?

A flashing headlight is useful in daylight and at dusk but should be avoided in full darkness for three reasons: 1) it’s difficult for motorists to judge your speed and location from a flashing light; 2) a flashing headlight announces that you are on a bicycle = SLOW. This could inspire motorists to violate your right-of-way. 3) an ultra-bright white LED on a flash pattern could cause a seizure in someone who is vulnerable them.

A flashing taillight also announces that you are on a bicycle, and that is a good thing for motorists to recognize when approaching from behind. It’s best to use a rapid flash pattern for the taillight. If you have two taillights, you can use one on flash mode and one on steady mode.

Good bicycle lights for daytime use?

Some bicyclists, especially those who ride on rural roads, use lights during daylight hours, to be more visible. To be noticed, lights have to be much brighter during the day than at night. Any light used for both day and night should have a different mode for each.

More general information about lights can be found in John Brooking’s article on this blog. 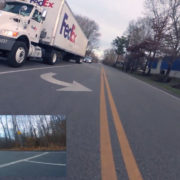 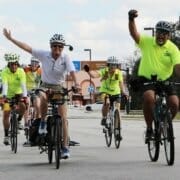 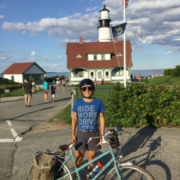