This addendum has been created for California bicyclists to accompany the print or electronic version of Bicycling Street Smarts (CyclingSavvy Edition, 2019) by John S. Allen (author) & Keri Caffrey (illustrator). Print copies of Bicycling Street Smarts may be ordered at CyclingSavvy.org/cyclingsavvy-store. An electronic Kindle version can be purchased from Amazon.com or borrowed free by Kindle Unlimited subscribers.

California uses some roadway signs and pavement markings specifically for bicyclists. Here are two of the newer ones.

Bikes May Use Full Lane Sign
[CA-MUTCD, Section 9B.06] 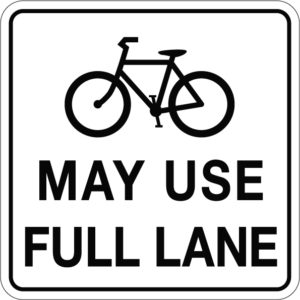 The Bicycles May Use Full Lane sign (R4-11) may be used on roadways where no bicycle lanes or adjacent shoulders usable by bicyclists are present and where travel lanes are too narrow for bicyclists and motor vehicles to safely operate side by side. This sign may be used in locations where it is important to inform road users that bicyclists might occupy the travel lane. 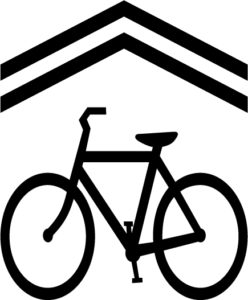 The Shared Lane Marking or “Sharrow” (9C-9) is a pavement marking used to assist bicyclists with lateral positioning in a shared lane with on-street parallel parking in order to eliminate the chance of an opening car door impacting a bicyclist. It is also used to assist bicyclists with lateral positioning in lanes that are too narrow for a motor vehicle and a bicycle to travel side by side within the same traffic lane. In addition, it alerts road users of the lateral location bicyclists are likely to occupy within the traveled way, encourages safe passing of bicyclists by motorists, and reduces the incidence of wrong-way bicycling.

Comment: Bicyclists on public roads must follow the same laws as vehicle drivers, including riding on the right side of the roadway, yielding appropriately at intersections and driveways, and observing all traffic control pavement markings, signs and signals. 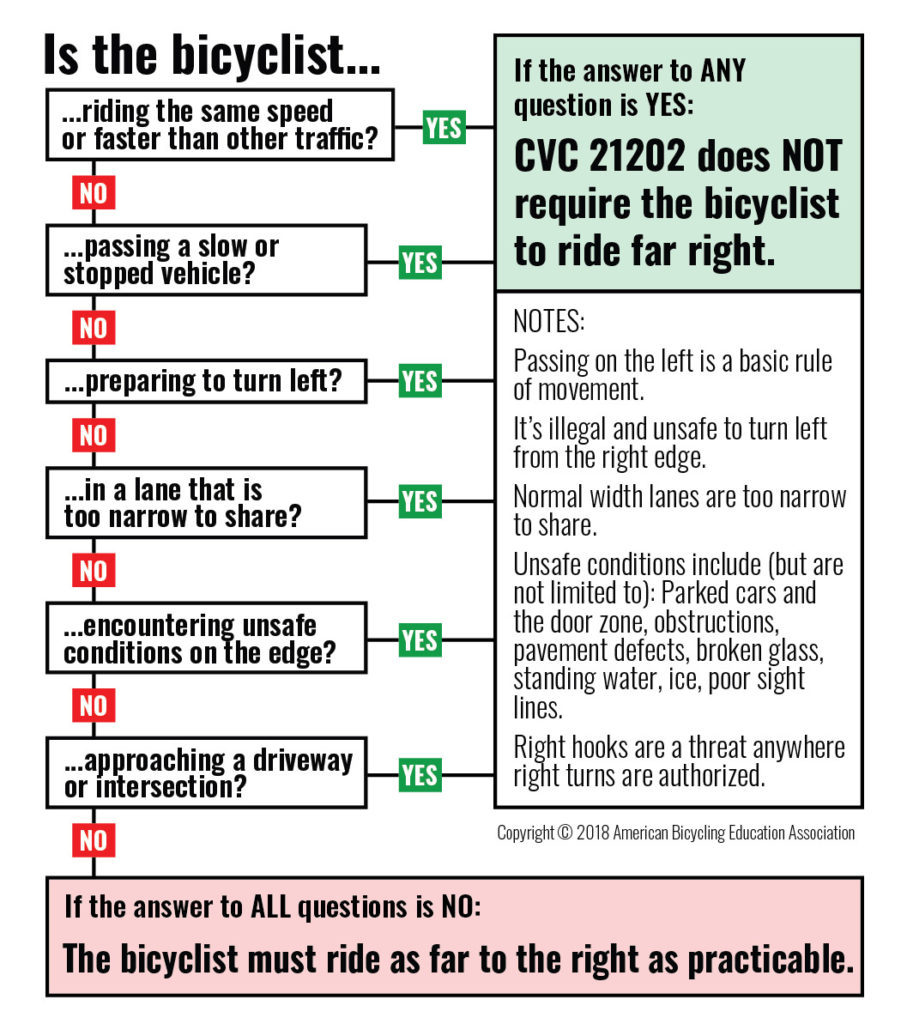 Comment: While California law requires bicyclists traveling slower than other traffic to ride as far right as practicable, it also provides several exceptions to this requirement, at least one of which usually applies. This CVC 21202 flowchart outlines the exceptions, any of which authorizes bicyclists to use the full lane. Learn more about where to ride on the road in Chapter 2 (p. 10) as well as Chapters 3, 4, 5, 6 and 8 of Bicycling Street Smarts.

Click the image above to learn more about lane widths.

See CyclingSavvy.org/cvc21202/ for more information about the history of CVC 21202 in California.

Bike Lanes [CVC 21208 (a)] Whenever a bicycle lane has been established on a roadway… any person operating a bicycle upon the roadway at a speed less than the normal speed of traffic… shall ride within the bicycle lane, except that the person may move out of the lane under any of the following situations… (see flowchart below for exceptions) 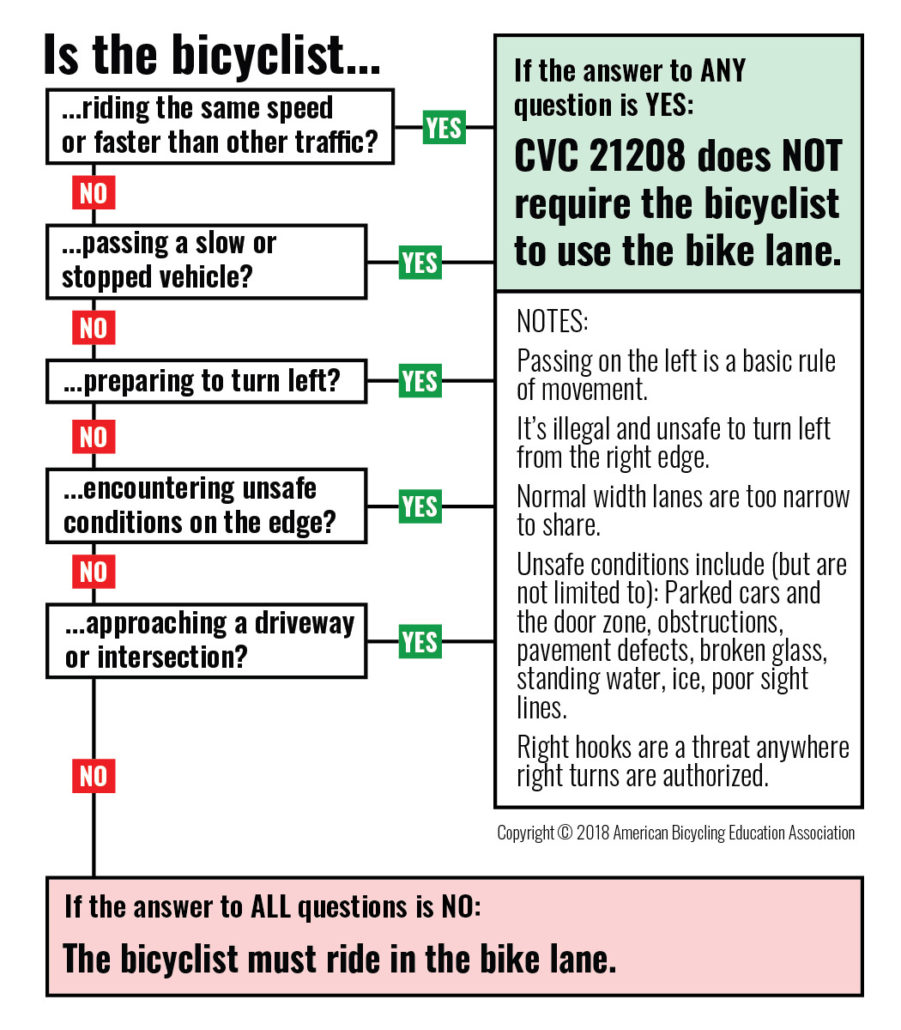 Comment: While California law requires bicyclists traveling slower than other traffic to use provided bike lanes (called Class 2 Bikeways), it also provides several exceptions to this requirement. The CVC 21208 flowchart above outlines these exceptions, any of which permits bicyclists to use the general travel lane instead of the bike lane. Learn more about bike lanes in Chapters 2 (pp. 12-13) and 3 (p. 20).

Comment: There is no law in California limiting the number of bicyclists who may ride side-by-side in a traffic lane. Riding double is often safer and a shorter group of cyclists is easier for motorists to pass (see Chapter 6). Bicyclists in a group are, however, subject to the laws concerning Roadway Position and Bike Lanes presented above. Bicyclists are therefore legally required to ride single file (a) in a lane that is wide enough for a single rider to share safely side-by-side with a motor vehicle, or (b) when a usable bike lane is available and none of the exceptions to CVC 21202 or CVC 21208, respectively, apply. Group riding is covered in Chapter 6.

Slow-Moving Vehicles Turning Out
[CVC 21656] On a two-lane highway where passing is unsafe because of traffic in the opposite direction or other conditions, any vehicle proceeding upon the highway at a speed less than the normal speed of traffic moving in the same direction at that time, behind which five or more vehicles are formed in line, shall turn off the roadway at the nearest place designated as a turnout by signs erected by the authority having jurisdiction over the highway, or wherever sufficient area for a safe turnout exists, in order to permit the vehicles following it to proceed.

Comment: On two-lane roads, a cooperative bicyclist makes it easy for motorists behind to pass when safe to do so and may prevent a motorist from endangering others by passing when unsafe. Learn more in Chapter 2, pp. 10-11, Two-lane Roads: Balancing Courtesy with Safety.

Comment: There is no California law prohibiting sidewalk bicycling. However, local authorities may prohibit adult bicycle operation on some or all sidewalks as is done in many California cities and towns. Sidewalks and crosswalks are not designed for bicycle speeds.

Comment: Bicycles operating during darkness on a roadway, sidewalk (where permitted) or bikeway must be equipped with a front white light and rear red reflector or a solid or flashing red rear light. Many bicycle crashes happen in poor lighting conditions. It is very important to see and be seen when riding during twilight or darkness. A red rear light, though not required by law if a rear reflector is used, is an important additional safety device. Learn more about riding safely at night in Chapter 7, pp. 36-37).

Comment: Bicyclists under 18 years of age must wear a helmet on a public road or street, bikeway or public bicycle path or trail. Head injuries account for about one-third of emergency room visits for bicycle-related injuries. Bicycle helmets, properly fitted and worn, have been found effective in reducing the incidence and severity of head, brain, and upper facial injury. Learn more about proper helmet use on page 4.

Comment: Bicyclists may not use headphones or earbuds that cover, rest on, or are inserted in both ears. Use of such devices can be distracting. Sounds of an approaching vehicle may be masked by the audio device.

Comment: California recognizes three classes of electric bicycles (e-bikes). Class 1 and 2 e-bikes are limited to motor assistance up to 20 mph and may be operated anywhere a regular bicycle may be operated.Local governments have the authority to restrict the use of Class 1 and 2 e-Bikes on a bicycle path or trail, or any other type of trail.When in doubt, check local rules and regulations that apply in your area.

Class 3 e-bikes provide motor assistance up to 28 mph.  Class 3 e-bikes may not be operated on a Class 1 bicycle path or trail, or any other type of trail, unless permitted by a local authority or governing body ordinance. Operators of Class 3 e-bikes must be at least 16 years of age and must wear a helmet.

Motor-powered two- or three-wheeled vehicles that are not classified and labeled as a Class 1, 2 or 3 e-bike may not be operated on sidewalks, pedestrian paths or Class 1, 2, 3 or 4 bikeways and may be subject to licensing, registration and insurance requirements. 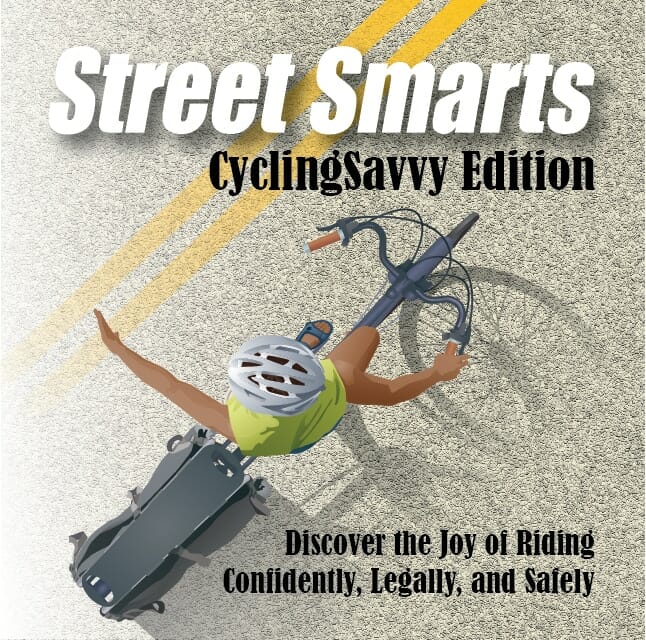 Download a black and white PDF of the California Addendum

Inside Cover: set up on a template for
Avery 5164 Shipping Labels
Download 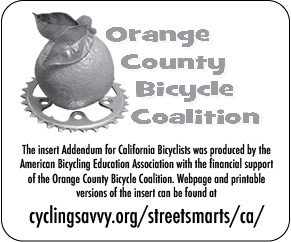 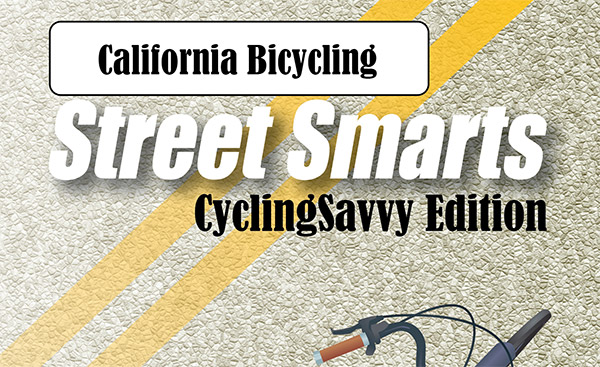 Resources for Bicyclists in California

The American Bicycling Education Association (ABEA) with Its CyclingSavvy program empowers people to use their bikes to go anywhere they want, safely and confidently.

The California Association of Bicycling Organizations (CABO)  protects the rights of California cyclists and promotes laws, policies, and actions that treat cyclists equitably.

The California Bicycle Coalition [] promotes cycling and provides links to bike maps and routes at calbike.org/go_for_a_ride/map_routes/

The League of American Bicyclists  represents bicyclists in the movement to create safer roads, stronger communities, and a Bicycle Friendly America.

This addendum is sponsored by
Orange County Bicycle Coaltion