It had been a long hot ride. Reaching the parking lot where we started, I heaved a sigh of relief. I made it! Sweat dripped into my eyes and rolled off my nose as I gratefully slid off the saddle. I began walking toward my car, leaning on my bike for support, when a friendly and somewhat concerned face appeared in front of me.

“Do you like tabbouleh? I brought some tabbouleh salad in a cooler.” He paused, adding: “I made it.”

The young man standing before me looked like he had just finished a short stint around the block. Surely he was not on the same ride I had just completed! I was finding this fellow to be quite unlike anyone I had ever met.

Normally he biked to club ride starts, but this ride was further out of town so he had driven. “Yes, that would be nice,” I replied. I walked with him to his black Toyota pickup truck. 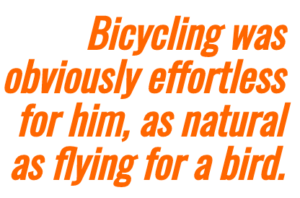 The tabbouleh was cold and delicious, and the nourishment began to revive me. To be honest, I pushed myself hard on this ride because I wanted to impress him. Bicycling was obviously effortless for him, as natural as flying for a bird. As I munched on tabbouleh, I wondered if I’d ever achieve his level of mastery and fitness.

Part of me was surprised to be so interested in this guy. After breaking up with a long-time boyfriend, I’d decided I’d had enough of men. I turned to exercise to work out my frustrations. I wanted to try the rides offered by our local bike club.

I had a beater bike from my college years, but didn’t want to bring it to these rides. I decided to treat myself to my first good quality bike. So I headed to a local bike shop, where they fixed me up with a neon yellow Trek road bike.

I started showing up for the club’s Wednesday night social rides. They were rather informal affairs. I’m not sure they even had an official ride leader. Everyone always looked expectantly to this guy to lead the ride. He accepted his role nonchalantly, as if it were the most natural thing in the world. Before each ride he’d go around the parking lot to help people pump up flat tires, adjust seats, generally check for loose things and make sure everyone had a bike that was ready to ride. 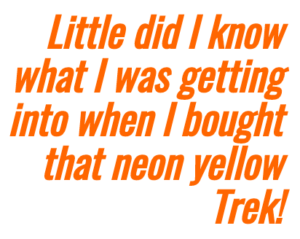 He never drove to these social rides. He always arrived by bike. After the ride, he made sure everyone returned safely and had their bikes properly loaded onto their cars. Then he left as he came, by bike. Always by himself. I wondered where he came from and where he went.

I was quite sure he was younger than me, way younger. That, along with my determination to avoid men, held me back. At the time he had long flowing black hair, the kind you see on heartthrobs adorning the covers of paperback romance books. He was thin, like he hadn’t quite grown into his frame. He was part of the bicycling group and yet he wasn’t. He stood apart, independent, never associating with anyone too closely. I found myself more and more intrigued.

And so I was surprised when the group stopped one day at a restaurant and he pulled a chair up to the table where I was seated.

The rest, as they say, is history. I never did achieve Mighk’s level of bicycling proficiency. But fortunately we enjoy biking together on a tandem. A sure way to not get dropped!

Over the years we’ve participated in many kinds of bicycling – off-road, tandem, road riding, touring, bicycling for transportation – and we’ve acquired many wonderful bicycling friends along the way. Next year will be our 25th wedding anniversary.

By the way, today is Mighk’s birthday. He’s actually seven months older than me. :-)

Like so many others, I feel confident that following Mighk is the right thing to do. I’m just grateful he picked me to be his lifetime riding companion.

Little did I know what I was getting into when I bought that yellow Trek! 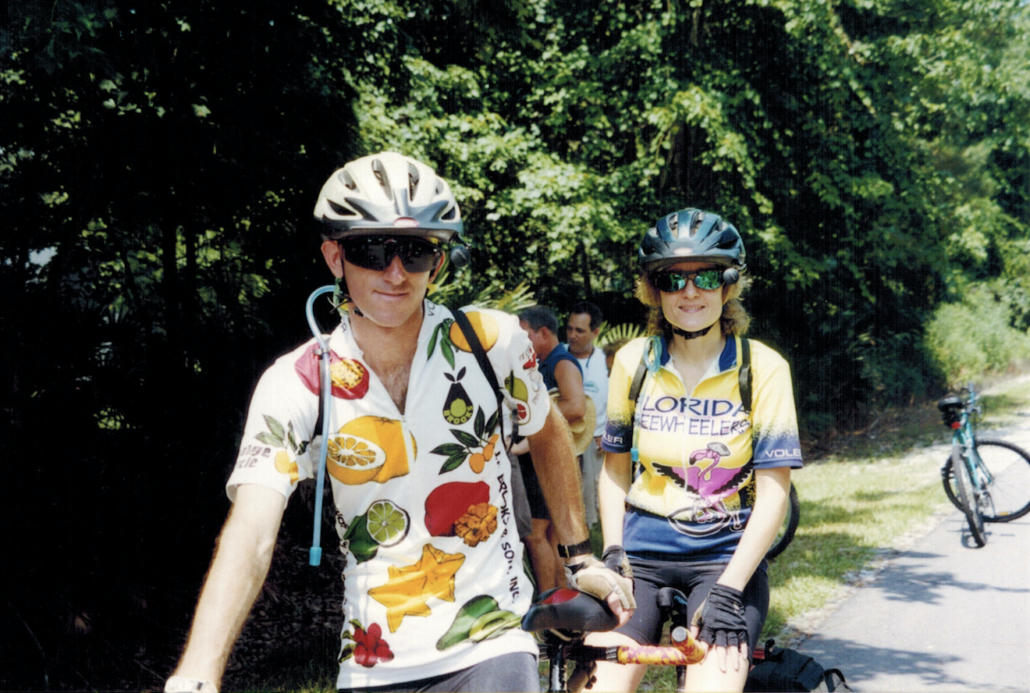 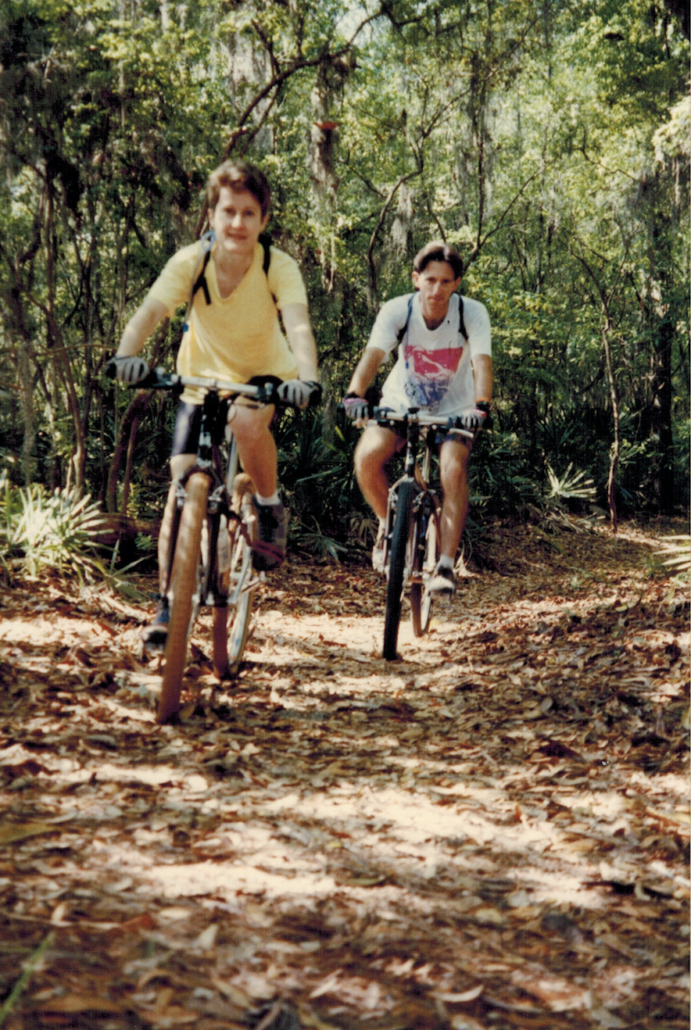 Enjoying the trails at Suwanee Bicycle Festival in North Florida (1998) 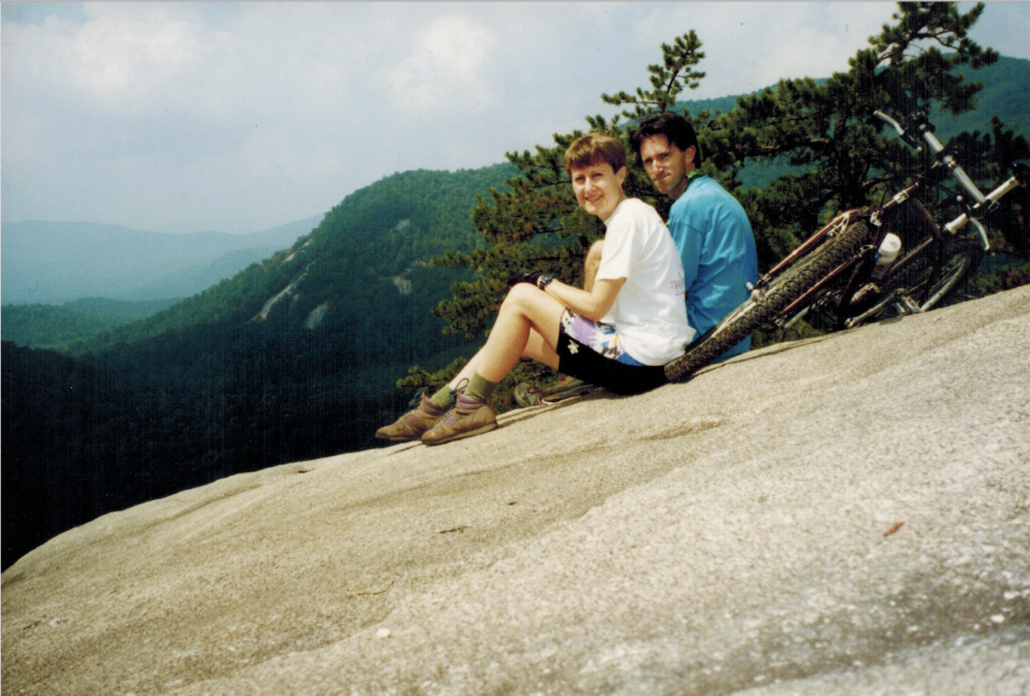 On a bald rock in DuPont State Forest (North Carolina, 1997) 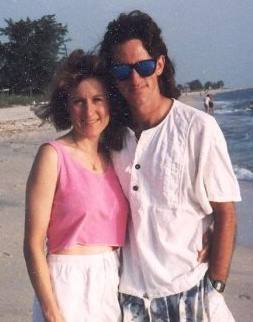 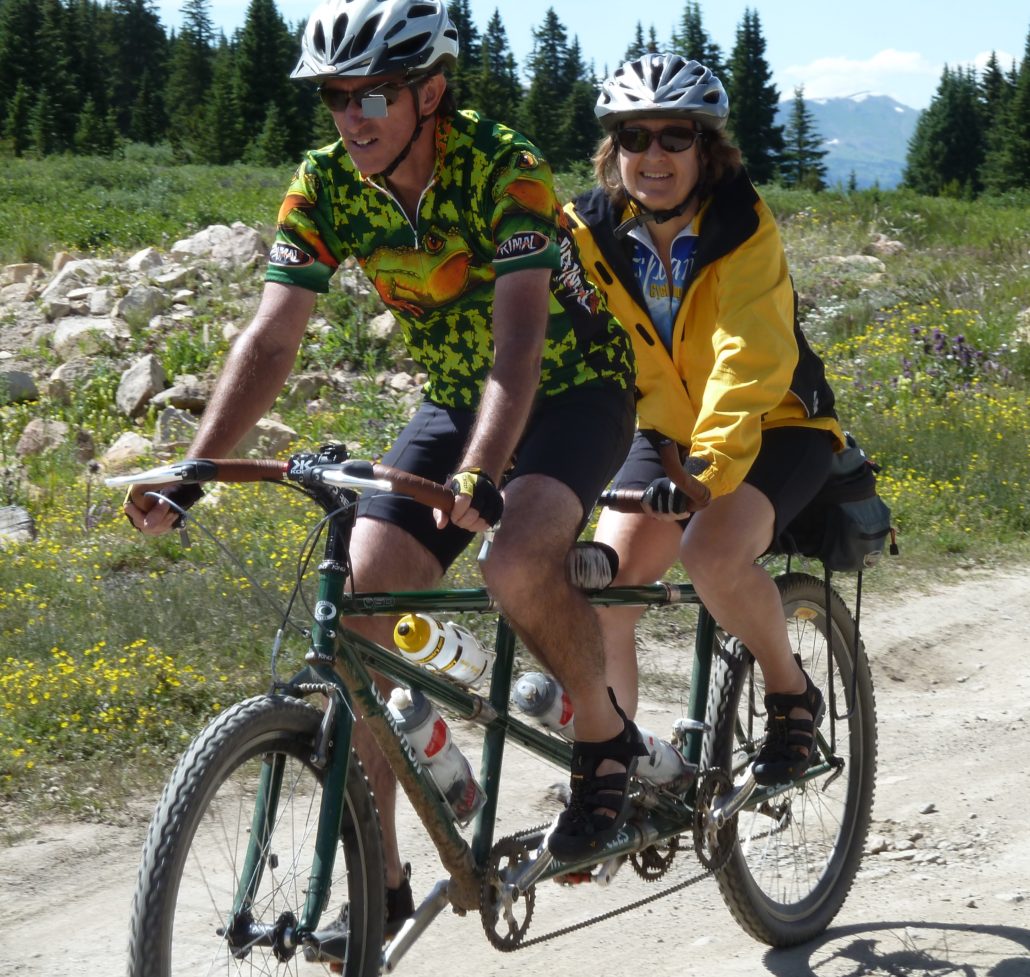