How fast is your city? You might have missed this info at the bottom of last week’s post about electric bikes. For most trips, an e-bike could get you to your destination as quickly as your car.

The trick is knowing how to keep yourself safe while you zip around. 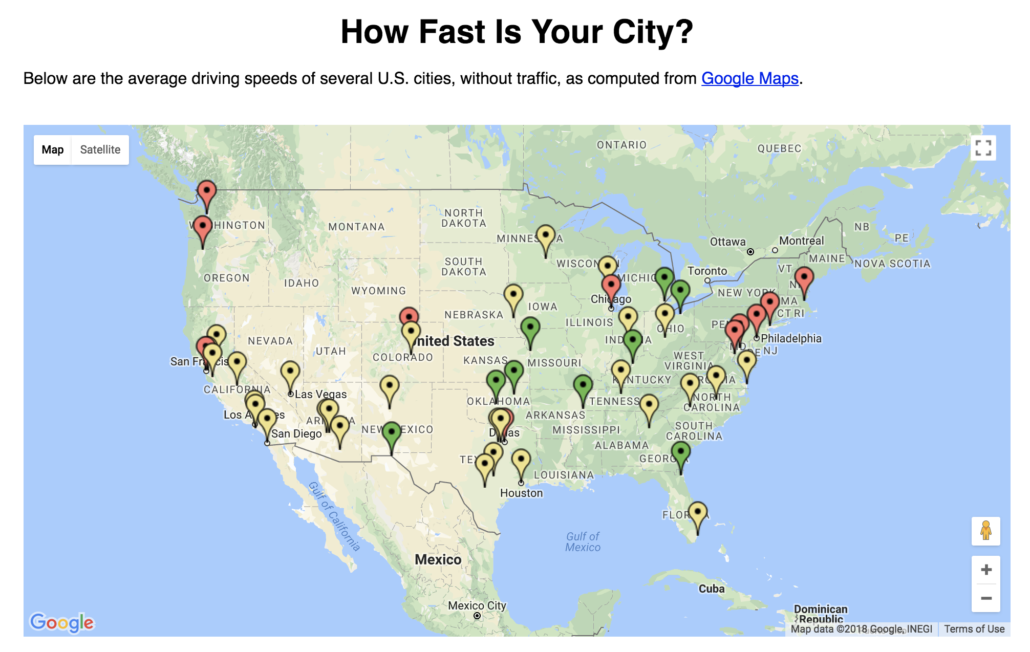 Four days after returning to St. Louis, I walked into my local e-bike dealer with my credit card ready. My husband and I didn’t own a cargo bike. After riding my sister’s electric cargo bike in Nashville, I wanted to see for myself if an e-cargo bike could truly replace car trips. 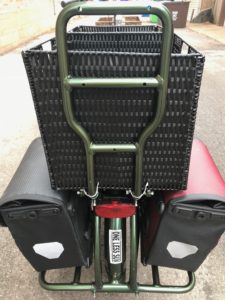 While we looked around the store, my husband noticed a lovely commuter bike. “That one’s used,” Archie, the dealer, told us.

It looked hardly used, and was deeply discounted. Harold and I would be able to ride together!

We bought it, and that hasn’t happened. Harold prefers his 100 percent human-powered bikes. There’s certainly good reason for that. With e-bikes it’s easier to get in trouble, because of the higher speeds a person can go. Harold calls himself “Old Turtle.” He likes to go slow.

A previous owner named the bike “Black Beauty.” I call it the “Black Stallion,” because it zips along like the most gorgeous beast.

When I had my accident, I was riding on Kingshighway, one of our town’s major arterial roads. The Stallion and I were zipping over to The Hill, an Italian neighborhood about three miles from my home. I was in the outer of three lanes and stopped at a red light with other traffic. I planned to turn right, and had already signaled my intentions to the driver behind me.

While waiting at the light, I glanced to my left at a woman in a white car. She thankfully saw me, too, because of what happened next.

The light turned green. A shiny red pickup truck in front of me started to go. The Stallion took off as I engaged both the throttle and pedal assist, which was in its highest speed.

Then the driver in front of me stopped.

I slammed on my brakes to avoid hitting the back of the truck. Because this e-bike’s back end is heavy — that’s where the battery is — I didn’t fly over the handlebars. But I did lose control. I fell to the left on the road, and was suddenly blocking two of the three lanes of traffic.

At the time I had a milk crate zip-tied to the rear rack. As I fell over, the crate’s contents spilled onto Kingshighway. (Yes, after this escapade I started using a bike cargo net.)

The woman in the middle lane stopped her white car and jumped out. “Are you OK?” she asked. “I’m fine,” I responded as I stood and lifted my bike back up. “I just didn’t want to hit the truck in front of me.”

I don’t know what story she told that night at her dinner table, but that’s my version. Mainly I was embarrassed, holding up TWO of the three lanes of traffic going in my direction. All I wanted was to get out of the way.

The woman found my U-lock in front of her car. She picked it up and gave it to me. I waved apologetically to all the people I was holding up and walked my bike and bruised ego onto the sidewalk. 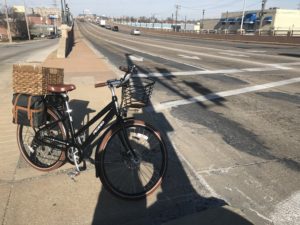 This is typically how the Kingshighway bridge looks as I cross it. There’s nothing scary about empty pavement! 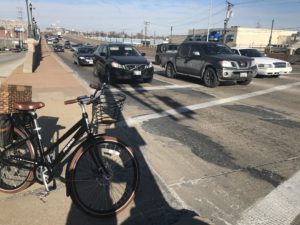 While the light is red, though, lots of others pull up and wait at the light with me. When I slammed on my brakes and crashed to avoid hitting a pickup truck in front of me, this bike and I blocked two of the three traffic lanes.

I’ll make a mistake once, but not twice. As soon as I got home, I described what happened to my fellow CyclingSavvy instructors. I needed to talk about this. I never dreamed I could smash a bicycle into the back of someone else’s vehicle! CSI Brian Cox, a fellow e-bike enthusiast and bike shop owner in Southern California, had excellent advice.

“With a people-powered bicycle, you did not have the acceleration capability you now have with a motorized bicycle.”

“With an eBike, we ordinary riders can now ride at racing speeds,” he observed. “We therefore need the vigilance, razor sharp attention, and caution that go with riding that fast.”

Hmm. John’s right, though when I’m practicing “driver behavior,” I’ve felt fine riding the bikes at their max speeds of 20 to 25 MPH.

E-bikes magnify the need to understand both cyclist and motorist behaviors. For example…

My e-bikes have indeed replaced my car trips. But I’m well aware that they are still bikes — and that no motorist wants to be behind me, even if I am going as fast as Lance.

This is part of being savvy, too: How to help others who want to go faster than you do so, easily and without conflict.

Then — especially on an e-bike — you invariably pull right up behind them at the next red light. Just make sure not to hit ’em.

“As more riders adopt e-bike technology, experiences like yours will help riders understand the power of the machines they ride and the need for sound bicycle handling skills to keep themselves safe.”