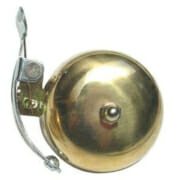 Bringing up bicycle bells raises the large issue of messages that bicyclists need should send out, and attend to.

For one thing, the bicycle makes a variety of sounds, some normal, others indicating mechanical problems. Understanding these sounds extends your pre-ride safety check into your ride —  especially important then!

Sounds alert you to other road users, and you to them. As is true with so much about bicycling, you have choices.

Voice or bell: does it matter? This is largely a cultural issue.

According to information which we have, bicycle bell is required  by law in some US states: New York, South Carolina, Georgia, and New Jersey. Local jurisdictions also may require one. Besides being useful to alert pedestrians and other cyclists, a bell can just be fun, especially in a group. Definitely consider it, especially where required by law.

Most bicycle bells can do no more than warn people of your approach, and are only loud enough reliably to alert people in the open air, that is, other bicyclists and pedestrians. (Bicycle air horns are a separate topic. Many of these are as loud as car horns.)

Bells tend to be prevalent where bicycle use for transportation is common. There, most people understand the sound of the bell to mean, “I’m approaching, be predictable so I can pass.”

No bell? Almost anyone can signal with the voice, and it works without lifting a hand from a brake lever. On the other hand, the voice does not identify the speaker as riding a bicycle. It can also be misunderstood or carry an emotional burden (for example, if the person you’re intending to alert feels like you’re “yelling” at them).

In the US, recreational cyclists commonly call out “passing on your left” or “behind you” rather than use a bell.

Your safety is confirmed not through the signal but through the response. Make your announcement early enough to allow the intended recipient(s) to react. Then check for the reaction, and go slowly and pass wide in case someone suddenly changes direction.

John Allen reports that he often calls out “heads up” to alert pedestrians headed toward him as they stare into their cell phones on university campus paths.

Have you seen the video circulating on YouTube that was recorded by a cyclist riding full-bore on the narrow promenade deck of the Brooklyn Bridge? He’s honking an ear-splitting air horn at anyone who might be in his way.

Can I talk about a sense of entitlement?

The deck, about 8 feet wide, has a painted stripe down the middle. Bicyclists are supposed to stay on one side, pedestrians on the other. That doesn’t work well in practice. (Don’t blame the City of New York for the narrow deck. The bridge opened in 1883, a century before design standards for shared-use paths were developed.)

On the Brooklyn Bridge promenade, or in similar conditions, a ding-ding bell and moderate speeds are more appropriate. Your cycling behavior should never frighten slower path users as you go past them.

Scaring people is rude, yet an imminent threat may bring on a loud yell or scream, unprompted. It can sometimes freeze a charging dog or wayward pedestrian.

Only a loud air horn and the like — or a loud shout — are likely (by no means certain) to be audible inside motor vehicles. Riding to be visible (we’ll get to that) and using lights (see previous section) are also effective to get the attention of motorists, before it becomes a problem.

We began this series of beginner “need to know” articles with checking to make sure your bike is ready to ride, and have now concluded a 3-part series on safety equipment: lights, mirrors, and bells. The next article will discuss clothing options for safety.