OK, folks, now I have ridden the route that takes me to two appointments along Massachusetts Route 9, through a gnarly interchange that I described in a previous post.

My route (right to left). Click on the image to enlarge it.

I think that I mostly got it right on the second try. I shot video, and now you can see how I did it.

You could do it on a sidewalk.

Yes, CyclingSavvy teaches safe pedestrian behavior, too! Even a novice bicyclist could use sidewalks to get through the Massachusetts Route 9/I-95 interchange.

Using the sidewalk, you’ll cross a couple of high-speed highway ramps. As you enter a crosswalk, either no traffic should be approaching, or a driver should come to a complete stop to allow you to cross, blocking other traffic. A blinking turn signal is a good indication that a driver will enter an on ramp; its absence is no guarantee that a driver will not.

But I did it in the road.

Using the roadway is faster, and savvy strategies make it work better.

Here’s how I prepared.

I drove through in a car, with a dashcam running. That showed me the basic layout of the intersection, but the experience is so unlike cycling that it didn’t help much. 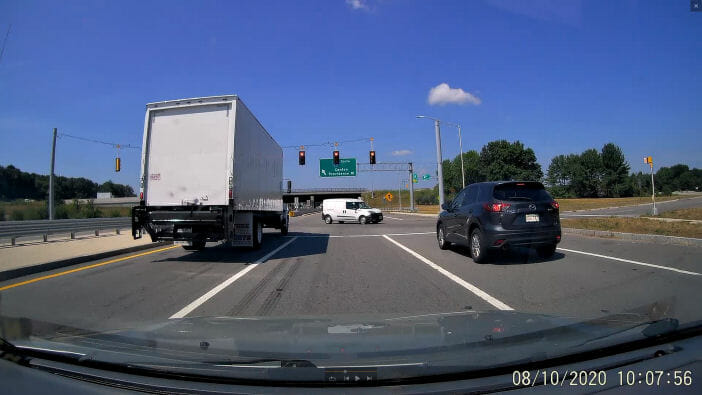 I next studied the route using Google Maps — as described in my previous post — and rode through a first time on my bicycle. The traffic lights were all green, and I just kept moving. I took notes mentally, and shot video.

Google satellite view of part of my route, right to left. Click on the image to enlarge it.

Why go to the trouble?

Was it worth going to this kind of trouble? Yes, so I could write this post, and so I could test savvy cycling strategies against the toughest challenge I could find within easy riding distance of my home.

Before I rode through a second time and reviewed my video, I wasn’t even sure that I would be comfortable riding here myself.

I am not running a contest to find the worst possible riding conditions.

Rather, I am demonstrating that the process to tame a troublesome route segment can work for very unfriendly road configurations.

Your time is well spent if it frees you to ride a bicycle more. After you’ve figured out one or two situations, others get easier and easier to sort out.

Strategies For A Busy Highway

The first stretch on a frontage road is easy. It’s 20 feet wide, a good example of where it makes complete sense to keep right so motorists can pass. 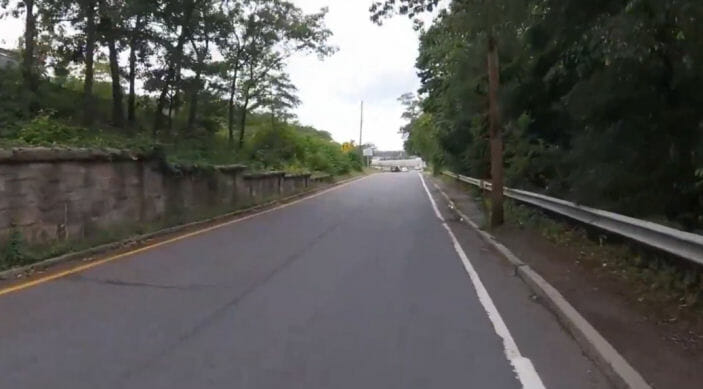 Then things get interesting. Unless you just happen to arrive at the end of a platoon of Route 9 traffic, you do well to to turn right into William Street and make a U-turn, as I did. I waited, at first behind a pickup truck, then I pulled forward and waited alone.

Waiting for the platoon to pass on William Street

By waiting, I could time my entry onto Route 9 and use traffic platooning to get an empty roadway most of the way to an off-ramp, the first major challenge of the ride. 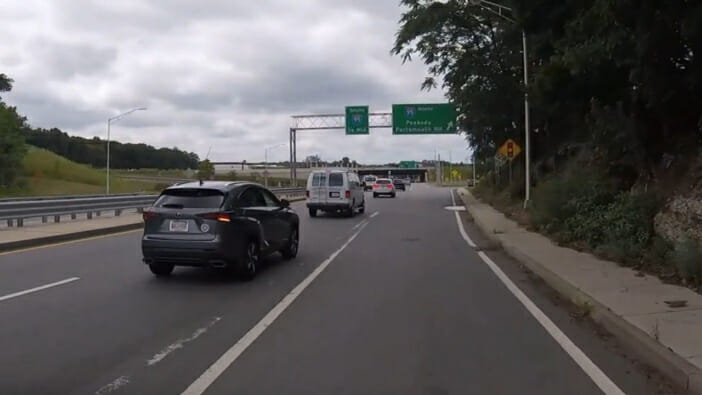 Last vehicle in the platoon, just ahead

On my way past the off-ramp, I rode in the left tire track, signaling that I intended to go straight and allowing a really big truck behind me to enter the ramp with zero conflict. 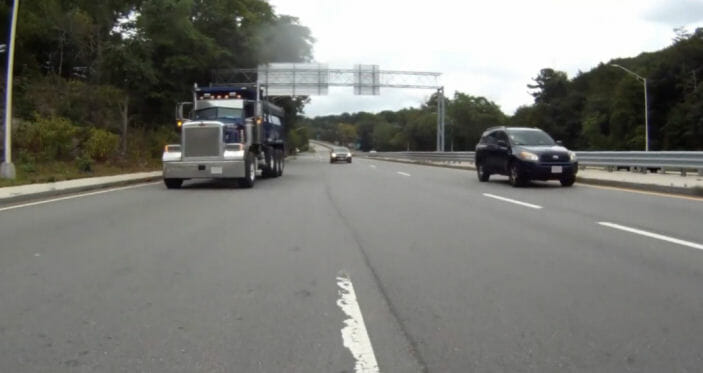 I continued past a traffic light, then pulled off onto the shoulder, where I could check for traffic coming from an on-ramp. I waited until the traffic light that I just rode through turned red to block through traffic.

If ramp traffic were heavier, I might have had to negotiate with an entering motorist to slow or stop, and then pass me on the left. But like me, entering motorists would have no main-line traffic to deal with, except for, well, me. Motorists could use the two empty lanes to my left. 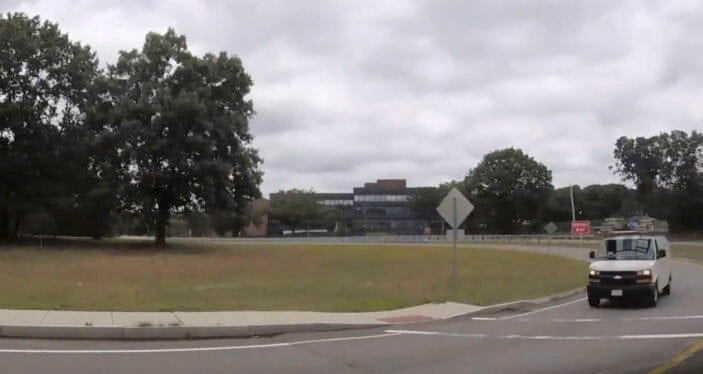 Looking back at the on ramp to Route 9

Thanks to my preparation in the previous step, I next rode through a long underpass on a completely empty roadway. This suited me because drivers exiting the ramp have a somewhat restricted sight line.

Looking back into a completely empty underpass

I got nearly to the next traffic light before it turned green. You may notice that the cars waiting at the light are from the platoon that passed while I was pulled over. Waiting for them to pass didn’t lose me any time. Had I not stopped, I would have waited at this red light. This traffic light blocks traffic entering from the right, and so I had clear passage on a green light.

Signalized on ramp at next traffic light

From this point forward until past the interchange, I used plain-vanilla CyclingSavvy lane control, riding in the rightmost through lane.

One rogue motorcyclist split the lane between me and the SUV to my left. This is legal in some states, but not in Massachusetts. Avoiding collisions with other road users of this ilk is one more reason to be predictable, though it would also be nice to see some law enforcement.

I kept a steady, straight line of travel, and Wild Man sped onward to crash somewhere else.

With lane control in a through lane on this high-speed highway, I was relying on motorists to change lanes and avoid me. They did.

Car merging to pass me

Rear-end collisions are rare, and motorists are unlikely to be driving distractedly when they know that they have to pay attention. But it can happen. My tools to avoid a driver who might rear-end me are glances into my rear-view mirror and if necessary, to swerve out of the way — though possibly into other trouble.

Another Trick Up My Sleeve

There’s another option in this segment: to use the right-turn lane and make a U-turn, as I did earlier at William Street, then turn right on a green light. This can help you ride without other traffic on the short shoulderless section of Route 9 that follows. (If I may editorialize, that segment of Route 9 hardly shows lip service to pedestrian safety. The sidewalks west from there look as though they haven’t been paved or cleared of overgrowth in 50 years.)

Little detour to turn right on green onto Route 9

I do think it’s good that I demonstrated the plain vanilla approach. If the video didn’t cover that, it would offer incomplete advice. On the other hand, with that last U-turn and right on green, it is possible to ride all the way through this interchange, on the roadway, without once mixing with high-speed motor traffic. But that isn’t possible everywhere.

After passing the shoulderless section, I rode a wide, paved shoulder the rest of the way to my destination.

Did you ever imagine that fast traffic might offer a safety advantage? On this busy highway, it does. Any driver who would turn right would have to slow way down, offering ample warning of a right-hook risk.

Riding on the shoulder west of the interchange

This part of the video got so uneventful that I have inserted a map of the ride, and titles, over parts of it.

No love affair with Massachusetts Route 9!

I do not like the interchange, whose present configuration dates from 2016.

Nor do I like the stretch of Route 9 designed in the 1930s, despite the shoulder that makes for an easy, if noisy, bicycle ride.

The crowning problem with both of these segments is that there is no other way in or out of office parks, residences and residential streets along Route 9, by any means of transportation.

As I remark in the video, there’s also no way to cross Route 9 for stretches of a half mile or more. As a result, Route 9 has created car dependency far in excess of anything usual in Boston suburbs.

Criticism is fair only along with explanations and suggestions. I have published another post, about the history of Route 9, to discuss the opportunities lost, and explore possibilities to improve matters.

I’m also planning to post a video of a a ride on the same route when traffic is heavier, in rush hour. I expect that the ride will be easier, because the traffic will be slower.