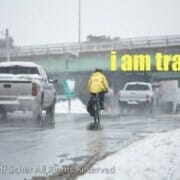 Not all routes are the same, and that is especially true for cycling. We all like to have relaxing, lightly-travelled routes that do not require constant vigilance and decision-making. 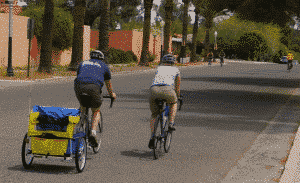 Riding on a quiet street

Unfortunately, not all roads are like that. For those of us who ride for transportation, there is sometimes no avoiding the occasional stretch of big car-centric roads, or if you’re unlucky, more than occasional.

Sometimes planners and engineers don’t appreciate the need for cyclists to use busy roads. I remember one time during a debate about removing parking in order to install bike lanes, someone suggested maybe cyclists could just cut through a local park instead, as if we were all just looking for a nice leisurely ride, not actually going somewhere.

Another instance of this assumption about where bicyclists want or do not want to ride came up in relation to what I consider one of my proudest advocacy achievements to date, getting Bikes May Use Full Lane signs installed along a four-lane arterial, William Clarke Drive, in my small town of Westbrook. During the conversations leading up to their installation, I heard through the grapevine of one official questioning wouldn’t bicyclists rather use Main Street, which parallels William Clarke. Presumably, he thought this because the posted speed there is slower, and in many places, the lanes wider. But the flip side of that comment is questioning why would bicyclists want to use William Clarke, maybe further implying the question of why any accommodation for bicyclists on William Clarke was needed at all.

What About “Big Roads”?

While there’s no question that roads with slower and less frequent traffic are nicer for everyone (even motorists), over the past several years I have been learning to appreciate “big roads” as well, by which I mean roads with more than one lane in each direction. Why? Because of CyclingSavvy’s teaching about how to ride on such roads. Because the lanes are almost always too narrow to share, and there’s at least one other same-direction lane provided for passing, we advise cyclists to just control the lane all the time, and stop worrying so much about the traffic behind you. There will always be occasional jerks, but on the whole, most people simply change lanes calmly and pass without incident.

(Yes, if it’s very busy and people are having trouble passing you, it’s okay to move off the road temporarily to let the pack pass, “relieve the pressure” as we say. But the point is, if you’re in the lane at all, don’t worry about varying your position in the lane to allow in-lane passing or not, because it’s almost never a good idea. Just set your position near the center and don’t think much more about it.)

Because it’s really so easy, once you get it through your head that you are an equal road user with as much right to the center of narrow lanes as motorists, using these big roads is more and more becoming my choice over two-lane roads with moderate traffic, such as Main Street that parallels William Clarke in Westbrook. Consider the following comparisons of these two streets:

On every one of these criteria, William Clarke is actually easier. Simply put, Main Street presents many more challenges, and requires more thought, than does William Clarke Drive. Once you accept that you are a regular driver in control of your lane like any other driver, William Clarke and similar roads are practically worry-free in terms of having to think about what you’re doing. Yes, stay alert, but there are so many fewer decisions to make! It’s almost boring. But when it comes to cycling around traffic, boring is good, n’est çe pas?

Here’s another example. Sometimes I go to downtown Portland after work, often via Broadway in South Portland. From my office, this involves getting through the Exit 3 interchange of I-295. This interchange is dreaded by most cyclists I talk to about it, and it is certainly a scary prospect for beginners. It’s confusing enough even when you’re driving a car, the first time or ten that you do it!

Southbound, there are two right turn only lanes in a row, first for the interstate onramp, then for Broadway, with a traffic light in between. Just before Broadway, the left lane branches out to another lane, providing a left turn only lane nearest the center, then a combined left/through lane (map). I need to turn left to go downtown.

In the simplified drawing to the left, the pink and red line shows how most inexperienced cyclists would navigate this exchange southbound (bottom to top of drawing), always sticking to the edge as long as possible. The darker red indicates the potential conflict points between the edge cyclist and motor traffic looking to move to the right. (Too often in these situations, elsewhere in the country, bike lanes have been striped using this exact same approach, institutionalizing all that  conflict. I’m actually thankful that has not been done here, because it just reinforces the least recommended practice.) First, one has to watch for right hooks past the entrance and exit for the Irving gas station (indicated by the circled letter I), then at the onramp, and again at the Broadway right turn lane. If one is turning left on Broadway, as I do, an edge cyclist would then have to cross any through traffic as well.

I may have done this a time or two myself in my early days of cycling, through I really don’t remember. The first I really remember using this route is after taking Traffic Skills 101. What I would do then, is start out in the right half or right tire track of the right lane, then change lanes as needed, first at the interstate ramp, and again to avoid the right turn onto Broadway. That was a little better than complete edge behavior, since I was at least a little more in control of my lane, but it still involved a lot of sometimes awkward negotiation with traffic that had inevitably stacked up at the traffic lights.

Possibly the best single thing CyclingSavvy did for me was inspire me to how I ride through this intersection now (right, green line). Once I got beyond the belief that my place was on the right for as long as possible, including even the LAB admonition of “rightmost through lane” most of the time, I realized that if I got into the left through lane before the interstate onramp even started developing, at the red light in front of the Irving station, or sometimes even the red light before that (off the bottom of the picture), I could just sail right through in that left lane the whole time, never having to change lanes again to take my left onto Broadway. It’s SO EASY! I don’t have to ever worry about all the traffic getting onto I-295 and turning right on Broadway; all that craziness is happening a whole lane away from me, on my right, where it doesn’t concern me. Furthermore, the left lane contains less traffic to begin with, so I have fewer motorists to contend with, and fewer of them have to contend with me! This strategy has reduced this scary-looking interchange to almost the Sunday-ride-in-the-park level. (And about 80% of the time, it happens without a single honk or yell, even at rush hour!)

“But John,” you may say, “In Maine, the law is that we have to ride as far right as practicable. Is this legal?”

My reply is that this action conforms with the following 4 exceptions to that law, excusing me of having to put myself in danger by following the edge path shown in red:

Now I frequently find myself looking forward to being able to ride on a 4-lane road, if the choice is between that and a moderately busy (or busier!) 2-lane road. Because you know what? I’m lazy! I know how to do control-and-release on two lane roads, and I do it when I have to, but I’d really rather not. It’s just so much thinking! I do enough thinking in my I.T. job. It’s nice to be able to relax a little more on my travels. While small lightly-traveled streets will always be the nicest, big roads that create fewer conflicts and require fewer decisions of me than two busy two-lane roads can be almost as nice, when you know you’re an equal user of them. 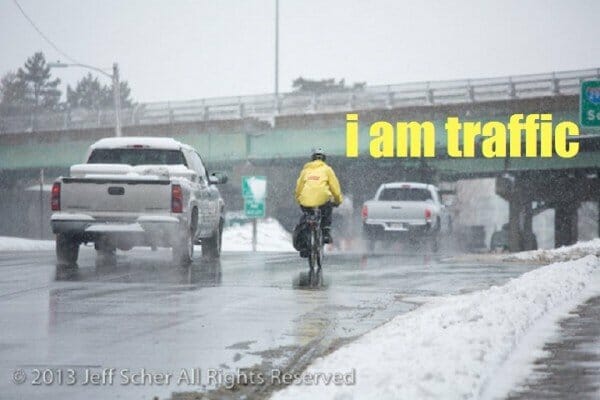 The author outbound on Congress Street past I-295.