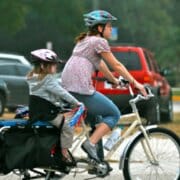 It’s official–I learned how to ride a bike this week!  Yesterday, I finished up a CyclingSavvy class.  This was a pilot class* for the Florida Bicycle Association; Part I was a three-hour lecture-style class and Part II was a six-hour road class.  I was feeling a bit overwhelmed with the thought of adding on one more thing to my already crazy week (especially 30+ miles for the class on Saturday!), but I am really glad I went.

The classroom-class was an excellent introduction into the practical side of riding.  It wasn’t focused on vehicular cycling per se, but it did feel like it had a commuter-cyclist focus.  I was a bit surprised to see that most of the graphics and such showed riding in the bike lane.  I have really mixed thoughts on that, but I’ll get into that another time.

I got an email on Wednesday with the route for Saturday’s road class and about broke out into a cold sweat when I read things like “drills” and “individual exercise turning onto Colonial.”  I was thinking of the many reasons I might cancel (the kids really were sick!), but ultimately knew that these skills would keep me safer out there on the roads and thus Saturday’s class couldn’t be avoided.

The class included a lot of drills like turning, shoulder checks, quick stops, etc.  I feel a lot more confident about my bike-handling skills after the class.  The most valuable, though, was regaining confidence in my bike.  I love my bike.  Like, a lot.  However, I have to admit that all my earlier issues had left me feeling less than 100% confident in my bike.  It wasn’t the quality of the bike or anything like that.  I was just carrying a bit of uneasiness around after nearly losing my rear tire and I hadn’t quite recovered.  There were several times during the drills that Keri and Mighk (who both lead the class) were like, “Well, you don’t need to worry about that on the X.”  I feel like I am riding the Volvo of bikes!  The best was seeing that I could just about stop on a dime with my brakes–the very same brakes that I had been fretting over.  Being reassured that I can trust in my bike and that this bike is safe enough to carry around my daughter was huge. 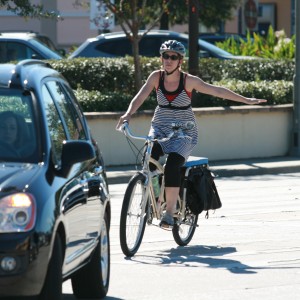 Check me out turning on Colonial! (photo by Keri Caffrey)

The ride was awesome.  Downtown on a Saturday was so relaxing–I can’t wait to get out for a nice family ride!  We covered some great exercises, including passing a highway on-ramp and crossing diagonal railroad tracks; these are things that I don’t normally experience on my ride, but would hate to be caught off-guard by with no knowledge of how to respond.

The class ended pretty late and Jesse had to meet up with me to bring my lights, so we made a night of it and enjoyed a nice dinner out as a family.  The girls got rowdy with my phone on the ride home, so I got to practice all my new handling skills by swiping the phone from Sofie and then doing a hand-off to Jesse (all mid-ride without swerving once, thank you very much!).  We had the clearest sky I’ve seen in ages and the most incredible view of the stars.   Looking up while Sofie tells me that she’s putting the brightest star in her heart so she won’t be afraid of the dark reminds me why I love my bike so very much.

I heartily recommend this class to all riders
Scroll to top