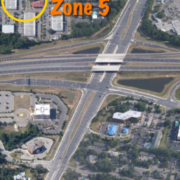 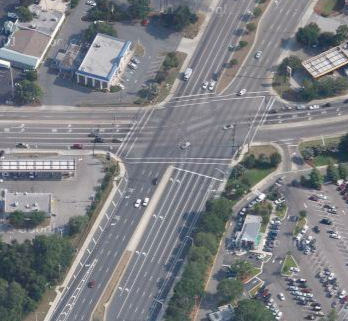 Between us and our destination is a massive, blown-out eight-lane interchange, where Thomasville Road meets Interstate 10. To get there, we have to make a left turn onto Timberlane Road from this eight-lane monster.

The video below shows two different ways to get over to the left turn lanes, to make the left onto Timberlane:

As we entered the interchange, we realized we would need to be turning shortly after the overpass. When the road widens from two northbound lanes to four, a bike lane also begins.

The bike lane is problematic, because once we entered it, we would then have to make four lane changes to get set up for a left turn. So we were keen to get away from a situation where we would be compelled to use the bike lane.

Here’s a diagram of the interchange showing our path from the right lane to the left lane:

I’ve numbered the zones and the lanes (lanes are numbered from the inside to the outside of a road).

Zone 2 is where we need to make the lane change 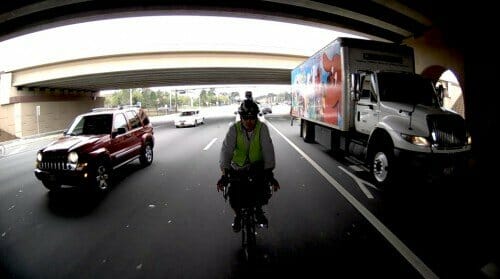 If we go any farther north, we risk not being able to make it to the left lane before our turn.

We don’t want to try to change lanes in Zone 3 because it is very short. It’s also under bridges — an area with strong shadows, as well as the potential for disoriented drivers making last-minute shifts to get to the interstate.

When we ride through there, we want to be in our destination lane with our attention focused evenly on our surroundings, not diverted backward trying to negotiate a lane change.

Zone 4 is also short. If we waited until Zone 4 to get to the left lanes, we’d have been compelled to use the bike lane. From there, we’d need a clear shot across four thru lanes and two turn lanes in order to get to the left turn lane before the Timberlane intersection. This is risky!

Zone 2 is about 870 feet long. You’ll see in the video that it took us almost all of that to negotiate gaps in traffic to make the three lane changes required to get to the left lane.

This is not a difficult maneuver, but requires skill with looking back and assessing traffic speed. It’s possible to be more assertive and oblige motorists to slow down and let you in front of them. But at these speeds, motorists are not reliably cooperative. It’s more realistic to hold each lane and wait for a gap in the next.

Zone 5 Cafe was our staging area to do some passes through the southbound interchange. Each pass required us to loop back around and make a left at Timberlane.

Having noticed the way the new lanes were formed, we used a different approach on the subsequent northbound passes. Here’s what that looks like:

On the second pass, we tracked the lane line straight as the right lane in Zone 1 splits into two lanes. This eliminated one lane change, keeping us in lane #2 — now the center lane. We attempted to move from lane #2 to #1 while we were still in zone one, but decided to wait for a fast-approaching van to pass.

Making the move where we did set us up to move directly into new #1 lane as it formed.

In the video, you’ll see the advantage of having made this move early, when it was easy.

We got stopped at the next red light. While we waited, the light collected a lot more vehicles in all lanes. Had we been in the right lane or the bike lane, we would have had all those cars between us and where we wanted to go.

The video ends with another short clip showing the full set-up being made in Zone 1, as we had intended the first time. Here’s a closer look:

In the strategic lane change we move from lane #2 to lane #1. From there, we simply move left to the new lane #1 without having to negotiate. It doesn’t get much easier than that!

Why We Used The Inside Turn Lane

Because we’re making a left turn from Timberlane in a few hundred feet, we want to use the leftmost left turn lane from Thomasville onto Timberlane.

This sets us up to easily get into the left lane on Timberlane. The outside turn lane leads to a lane that becomes a right-turn only lane. It also has a stub of a bike lane next to it.

If we were to use the outside left turn lane, then go into the bike lane, we’d only be able to travel a few seconds there before needing to negotiate two lane changes. That would simply be ridiculous. No other driver would be expected to do such a thing. 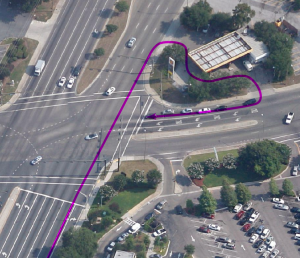 I ended up doing this as a Plan B the first time I rode through here using the bike lane. I wasn’t entirely sure where my turn was in proximity to the overpass. By the time I realized where I was turning, I didn’t have enough distance to negotiate four lane changes from the bike lane.

The traffic and structure of Timberlane is not conducive to a U-turn, so my best option was to ride past Timberlane and loop through the gas station on the corner, then cross Thomasville on Timberlane.

The gas station parking lot may look innocuous from the satellite, but such places are full of unpredictable movements. It’s important to be vigilant whenever riding through a parking lot — even a small one.

When you can plan ahead, making a regular left turn from a left turn lane is much easier. It only requires abandoning oppressive far-right thinking, and acting like any other driver who wants to go to the same destination.

If I were driving a car through here, I’d put myself in the left lane in anticipation of my turn, even if I didn’t know exactly where it was. It’s not as natural to do this on a bicycle. But it should be.

In the video with me are DeWayne Carver and Bill Edmonds, CyclingSavvy instructors who live in Tallahassee.

Help Us Grow!
I thought I knew everything I needed to know

Freedom and Vitality on 3 Wheels
Scroll to top