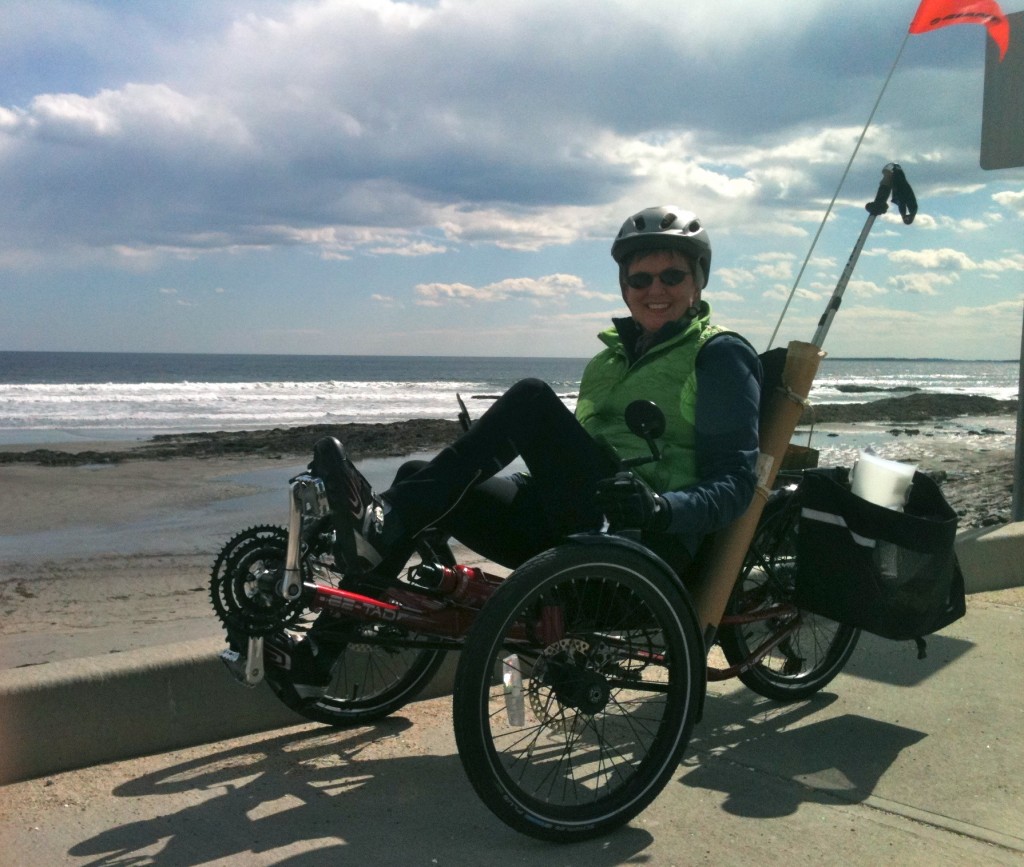 Twenty-seven years ago, after two 8-hour surgeries to remove benign tumors from my acoustic nerves, if you had told me I would ever ride a bike again I would not have believed you. The surgeries were successful but, as expected, hearing and vestibular function were significantly compromised. Swimming, skiing and cycling were out. By the time I moved to Portland, Maine in April, 2011, I was completely deaf and frequently used trekking poles or a walker to navigate our quaint sidewalks in Old Port.

Then one day in July as I was walking past Gorham Bike & Ski on Congress Street, I thought, “I wonder if they have trikes for adults…” and I went inside.

On August 6, I picked up my new Sun EZ Tadpole recumbent trike from the shop – more than a little nervous (my last bike was a Sears 3-speed circa 1972) – and more excited than a kid on Christmas Eve.

The trike is easy to ride. It is also a great vehicle for exercise and transportation, as I no longer drive a car. However, cycling in city traffic is serious business – especially for a deaf rider. My first missions were to learn how to get on and off the trike (not easy for someone with balance issues but doable if you use the brake grips strategically and there is a pole or fixed support nearby), master the gears, and – above all – ride safely.

The first few days were easy rides around my quiet neighborhood. Soon I was ready to venture further. Now I ride all over town, from West End to East End, varying my route, stopping for errands or to take few photos, generally having fun and feeling great.

However, I still had concerns about riding safely on city streets. So I was pleased to learn that CyclingSavvy would be offered here in Portland the weekend of August 27th. I contacted John Brooking, the instructor, to discuss my needs and recruited a friend to help with communication, then enrolled in the Truth and Techniques of Traffic Cycling. Because of the inherent differences between a trike and a bike, along with my communication challenges, we agreed to hold off on Train Your Bike and Tour of Portland. John and I will schedule a tutoring session for road cycling soon.*

The course was excellent in that it afﬁrmed things I already knew, clarified things I was unsure about, and clearly explained my rights and responsibilities as a cyclist. I’ve been putting into practice all that I learned.

As a person who has mobility challenges, buying the trike and getting out every nice day to ride is simply one of the best things I’ve ever done for myself. It’s healthy, empowering and – most of all – fun.

As Jean Paul Richeter (1763-1825) wrote, “For sleep, riches and health to be truly enjoyed, they must be interrupted.” It is no exaggeration to say that riding a recumbent trike has restored vitality to my life.

*Update from John Brooking: Michie wrote this shortly after her Cycling Savvy class in August 2011. As she indicated, we did follow up with a private tutoring session in September. First I took her trike for a test drive around Portland by myself for a few hours, to get a good feel for its handling and capabilities, then we spent a Saturday afternoon riding together a week or two later. Our main goal was the Casco Bay Bridge, the “big bridge”, which Michie was nervous about riding on. She brought along notepad and pen so we could stop frequently and communicate about what we had just experienced. The timing was good because there was an event in a town on the other side of the bridge that she was hoping to go to the next day, but first she had to conquer the bridge. She reported afterwards: “My ride last Sunday was great!  21 miles on nice roads and nice scenery, and the bridge crossing was easy.”

I now see Facebook updates from her all the time about how she’s out riding everywhere, from Falmouth to Scarborough! Freedom!

Help Us Grow!
Strategic Setup For A Left Turn

Couch Potato to Savvy Cyclist in 4.0 Months
Scroll to top