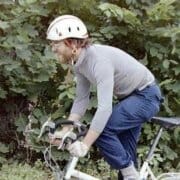 This is the story of Street Smarts, a book that — like Keith Richards — keeps coming back.

Book publishing has always been a brutal business. You sit at your writing device, slice open a vein, and the market rewards you by buying dozens of copies.

Two months later, you see your pride and joy on the remainder rack for a buck.

John S. Allen’s little bombshell of how to ride in traffic has thrived since its initial publication in 1988. The just-published Cycling Savvy edition promises to live long into the future. 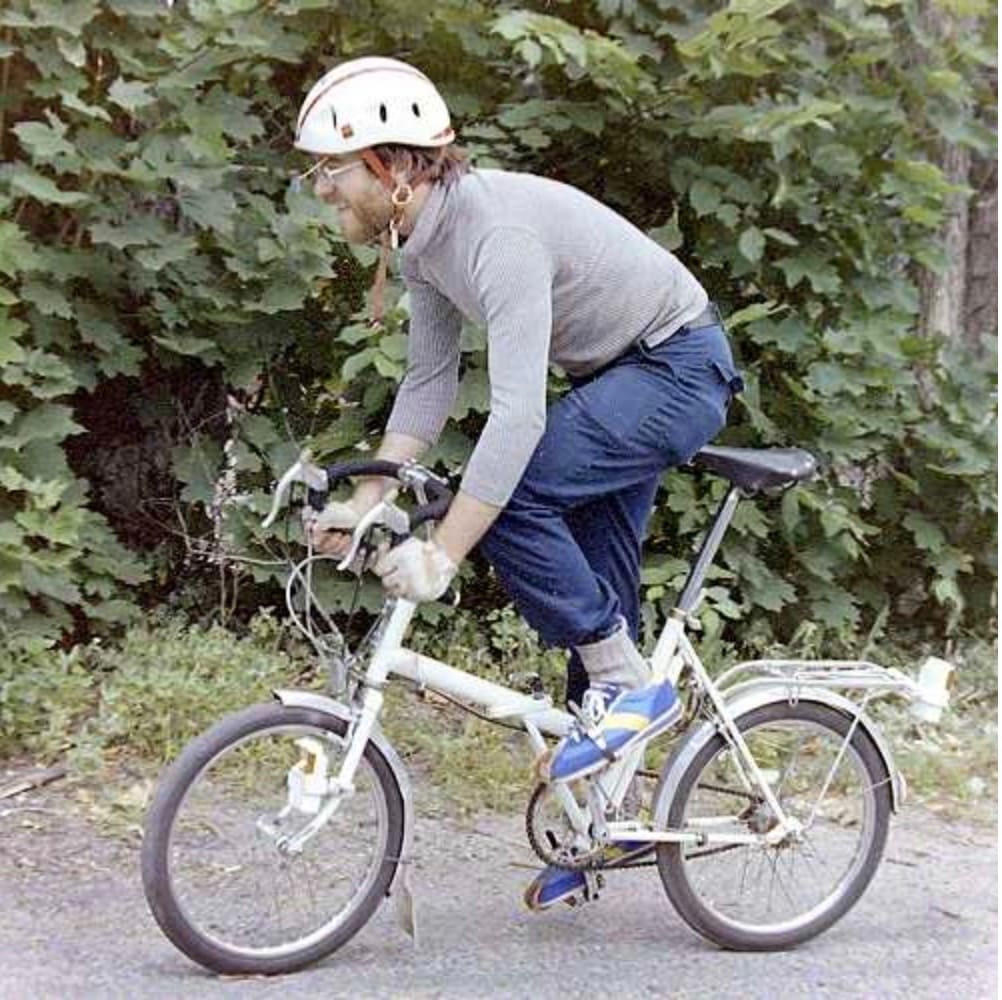 Street Smarts author John S. Allen, circa 1982. He customized this Raleigh Twenty folding bike with a Sturmey Archer five-speed hub and corrosion-proof marine epoxy paint. He’s ridden that bike on half centuries, commuting around Boston, and from the Bethlehem, PA, bus station to my flophouse.

How this came about is a cool story.

John Allen has been at this for a while. As long ago as 1965, he was bicycle touring in Luxembourg and Germany, and urban bicycle commuting in Baltimore.  A few years later, he moved to Boston.

In 1977 he bought and read John Forester’s Effective Cycling, a book which has taught thousands safe riding — but has also put off thousands because of its relentless “rage-against-the-machine” tone. Allen spent a few years thinking about how he might deliver a more upbeat version of that information.

Picture a bike riders’ flophouse down a dirt road, deep in the woods west of Coopersburg, PA.

That flophouse was mine.

We made great fun out of living, on a tiny budget. I was senior editor at Bicycling magazine in nearby Emmaus, and John had a book contract with Rodale Press to write The Complete Book of Bicycle Commuting. That book would become the basis for Street Smarts.

John wrote most of the book at the apartment he shared with roommates in Brookline, Massachusetts. But when he needed one of those quiet “writer’s retreat” type places, my spare room was all he could afford. (It was free.)

Every hour or so John would emerge from the room with a few sheets of paper, enthusiastically reading his latest section.

This man was pumped.

John created an upbeat, pleasant vision of safe traffic cycling empowered by the rider’s own wisdom. Paragraph by paragraph, it was flowing out. 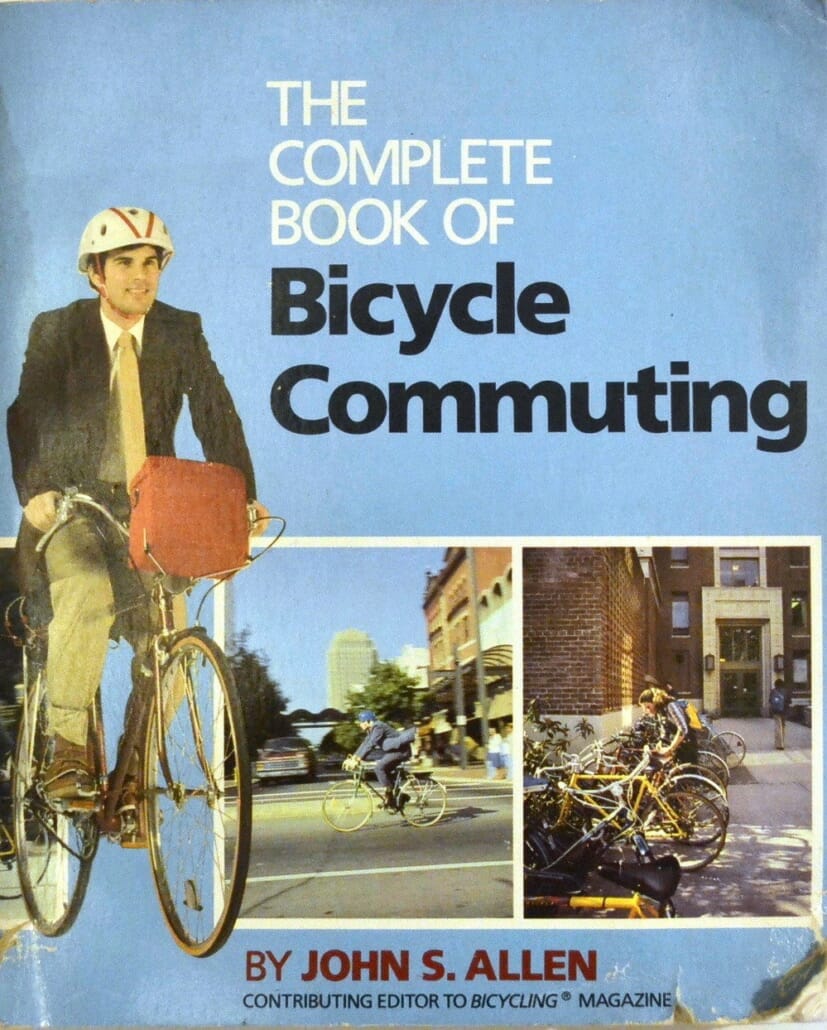 We — well, mostly I — drank Gibbon’s beer in 16-ounce reusable bottles, pedaled to Bicycling’s offices via a mountainous six miles — with 680 vertical feet of climbing and 1030 feet of descending — and complained about the Rodale Press bureaucracy. Gary Fisher, the mountain bike pioneer, and Jacquie Phelan, the woman’s mountain bike racing pioneer, were also staying with us at the time.

That typewriter clanged day and night.

John wrote his book on a 1932 Royal portable typewriter. He used erasable bond paper, paste and scissors to edit.

And a not-best seller was born.

The Complete Book of Bicycle Commuting had excellent information. It had hundreds of great photos and illustrations — by John, the late, great Sheldon Brown, and George Retseck — making it easy for the reader to absorb the information.

What it didn’t have was a winning sales strategy. My buddy Pechter is a handsome guy, but his mug didn’t make millions grab the book. And so The Complete Book of Bicycle Commuting went out of print after selling about 15,000 copies.

Bicycling magazine had a regular feature called “In Traffic.” John wrote many pieces for “In Traffic.” I had the, uh, privilege of editing his copy. John used information from the book, plus new insights from his ever-active mind, to make In Traffic a great go-to source for several years.

The circulation of Bicycling was about a quarter million, so we were reaching many cyclists with well-presented and thoroughly vetted information.

I left Bicycling, moving to Bicycle Guide and then Adventure Cyclist. John stayed in touch with Rodale Press, and a few years later, another opportunity arose.

Bicycling’s phenomenal circulation manager Patricia Brown needed a premium gift for new subscribers. She spoke with John about repackaging the traffic-riding portion of The Complete Book of Bicycle Commuting as a premium booklet.

After another spell of editing and revisions, the first edition of Street Smarts was born in 1988. Another score for good information dissemination! New subscribers to a special interest magazine are often in that “drinking in all information” stage. Street Smarts was a great source for them.

But in the late 1990s, a guy named Dave Bachman had great plans.

He was going to keep Street Smarts alive.

This man at PennDOT saw no reason to reinvent the wheel.

Hearing that, Bachman held up a copy of Street Smarts, and said, “How about we use this?”

Bureaucratic hurdles needed to be overcome.

Street Smarts is a very proactive book, telling riders how to assert their own safety. PennDOT had people who were more accustomed to the “stay out of the way, stop at stop signs and be very afraid” sort of instruction that was (and is) the more common (and quite unhelpful) bicycle “safety education.”

I would have expected PennDOT pushback. And the copyright belonged to Rodale Press.

But Bachman overcame hurdles at PennDOT by deploying his superpower: Patience.

Bachman was a master at calmly watching the bureaucrats and knowing when to say what to whom. He was quiet, never openly frustrated, and always mellow. He used those traits to enact the policies that more strident people (like myself) would shove and shout over.

Pennsylvania’s first Bicycle Driver’s Manual rolled off the presses in June 1999, exactly 20 years ago. PennDOT’s Bachman added a section with specific language from Pennsylvania traffic laws for bicyclists, together with his own plain-English explanatory language about how a bicyclist should interpret and comply with the legalese.

This first Street Smarts edition of the Pennsylvania Bicycle Driver’s Manual is a collector’s item because of a design mistake. Look closely at that wheel. It has two valve stems!

Rodale editor Nelson Peña handled the reassigning of rights. This was no trivial matter. Too often, a publishing house will refuse to let go of something it no longer wants for itself, but can’t bear to give away.

But Peña made it happen. In the process, Street Smarts established a working template for cross-licensing the publication with a government publishing office. That, too, was no small feat.

John took his gem to a new publisher, Rubel Bikemaps, did some technical cleanup, and worked with Andy Rubel, Madeleine Noland and Conrad Willeman on revisions.

Rubel’s edition appeared in 2001 and was sold through bicycle shops and bicycling organizations, along with Rubel’s line of maps. 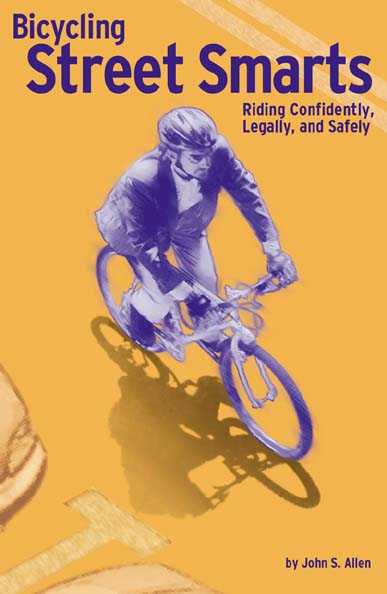 And then — wonders never cease — Rubel reached out to other states, and they decided to follow Pennsylvania’s lead!

CyclingSavvy was launched — and rearranged the way we taught people about their place on the road.

The paradigm changed from: “Yeah, people expect you in the gutter, but move out a couple feet” to: “The lane is yours. Control it unless you decide you have a good reason not to.”

CyclingSavvy included new strategies and techniques beyond those published in Street Smarts.

Through CyclingSavvy, Street Smarts came to live another life. 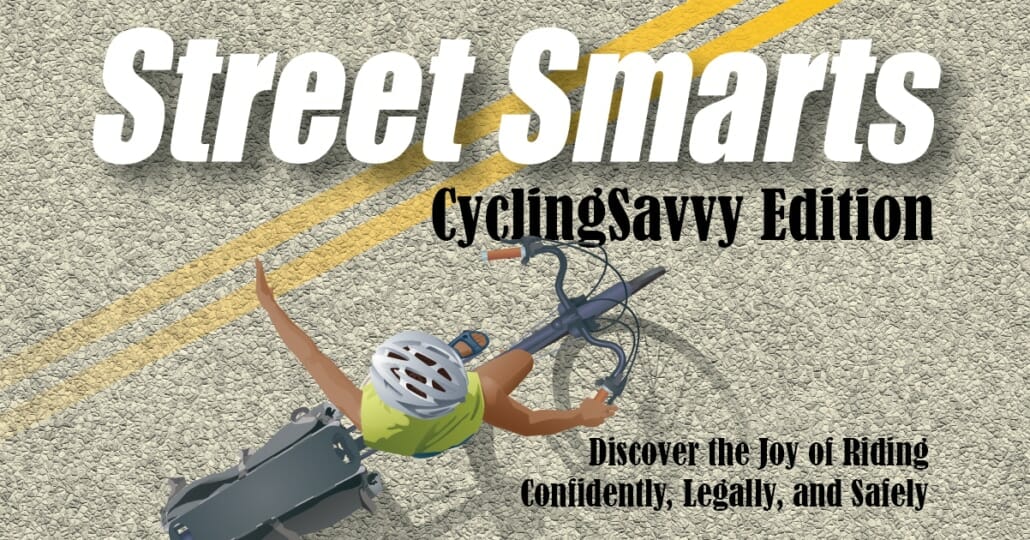 The moral of this story

When people work together well over decades, a good thing doesn’t have to be buried underneath bureaucratic dysfunction or “not invented here” syndrome. The good thing can evolve for the better. Everyone named in this article played a key role in launching and nurturing Street Smarts to where it is today.

And we’re ready for state DOTs to call up, saying, “We want that!” 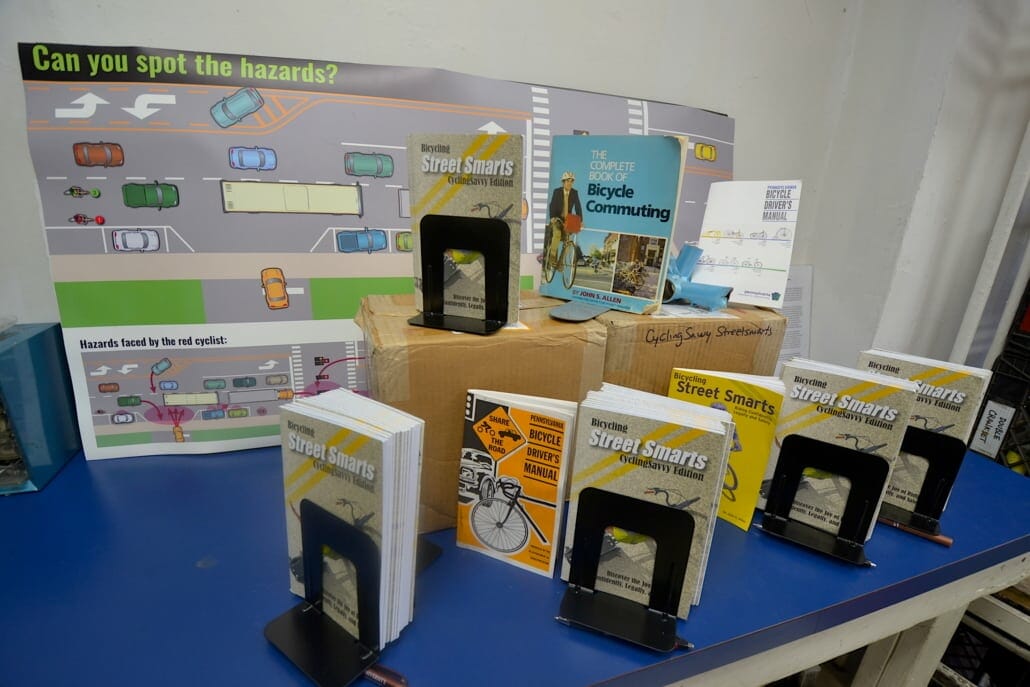 The new Cycling Savvy Edition of Street Smarts poses with four earlier editions. The editions of CyclingSavvy Street Smarts in this photo were a part of a generous gift of two cases from Marc Caruso to the Bethlehem, PA, Coalition for Appropriate Transportation.

Get the new CyclingSavvy edition of Street Smarts for your bookshelf!

Share it with your friends, and make it a frequent gift. For the price of a Starbucks coffee, you can transform a friend’s cycling. For a few bucks more, you can donate a case lot to your cycling club or advocacy organization. Want to resell? You may, and enjoy an excellent profit margin. (Calling all bike shops!)

Help Us Grow!
Foolhardy, Confidence-Inspiring, or Oddly Uneventful? You Decide