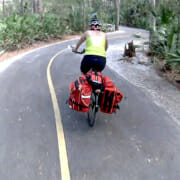 This is the second of two posts about how to be safe and considerate on shared-use paths. Part 1 was about etiquette when sharing the path with other users.

Shared-use path safety: how to make sure you keep the rubber side down.

Shared-use paths can be completely separate from the the road system, or can run alongside a roadway.

Separate paths commonly are on riverbanks, abandoned railbeds and utility rights of way. These paths offer a pleasant, car-free alternative for transportation and recreational cycling. These paths do cross roads, however, and I’ll cover some safety concerns for those crossings.

While paths are free of car conflicts between intersections, there are some hazards to look out for:

Paths through wooded areas are beautiful and shady, but root heaves, leaves and sticks can be a crash hazard.

Beware of fallen branches, especially after a rainstorm. Shared-use paths along rivers often cross under roads. Flooding can leave behind a thick layer of slippery sediment. 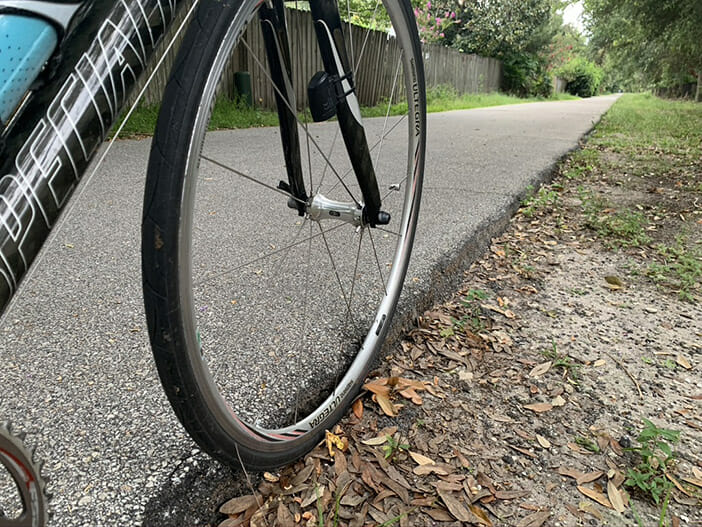 The edge of the pavement is a crash hazard.

You could fall trying to ride up onto the pavement. It’s best to stop, and then place your bike back on the path. 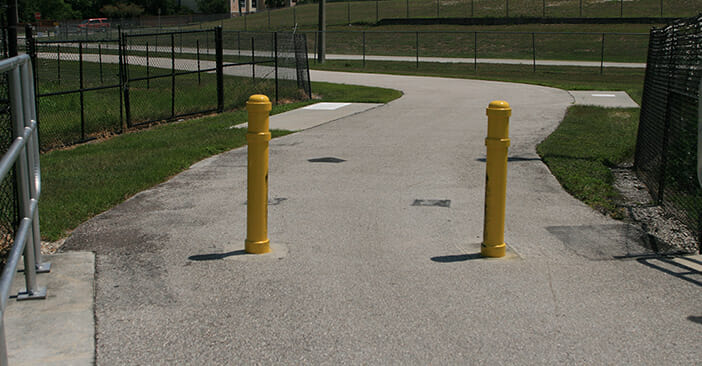 Most shared-use paths have some form of obstruction to keep motor vehicles from entering them at street intersections. The most common are bollards (posts). These are a cure worse than the disease; design manuals recommend against them. Nonetheless, they infest our path systems and have been responsible for serious and even fatal injuries.

When riding with others, the first rider should point and call out bollards. Move as far away from them as possible to ensure the riders behind see them.

When there is an even number of bollards, like in the photo above, be aware that oncoming cyclists may be aiming for the middle.

Median dividers are less hazardous. Cyclists still need to pay attention to avoid clipping a curb as the path narrows.

Many older shared-use paths are narrow and have tight areas and blind curves. Some will have a centerline, others may not. Keep right and approach cautiously. A cyclist traveling fast on the inside of the curve may underestimate its sharpness and drift to the outside. Head-on collisions between cyclists can be fatal.

On hills and bridges, high-speed cyclists can have conflicts with slow, wobbly cyclists  and other cyclists who pass them. Ride downhill with caution when other users are present. On bridge ramps with sharp turns, beware of unskilled bicyclists riding downhill.

There will be cars

Now let’s talk about intersections. Every path crosses roads at some point.

As a cyclist, the best way to ensure safety and avoid confusion is to communicate while approaching the stop sign. Use the stopping hand signal, and wave to indicate to motorists who have already stopped that you expect them to take their turn.

Push the button, and…

Some intersections have pushbuttons that operate a traffic signal. The buttons could offer an instant response, or coordinate with the signal timing at a nearby intersection.

Other pushbutton devices, like the Rectangular Rapid-Flashing Beacon (RRFB) shown in the video above, flash to alert motorists of the need to yield at the crosswalk. Pedestrian rules apply when crossing at these intersections. Road users are supposed to yield to traffic in the crosswalk.

But this doesn’t always happen, so make sure traffic is yielding before you cross. If the road you are crossing has more than one lane in each direction, be aware that a motorist yielding in one lane can screen you from a motorist approaching in the next. Check each lane before crossing it, even if you have a green light.

I’ve encountered a lot of red-light-runners at path crossings. Poor signal response often worsens this problem. When the path signal is timed along with another major road signal, path users get tired of waiting and go in a gap. Then the light changes and motorists have no one to wait for. Motorists who encounter this situation repeatedly are inclined to run the light.

A shared-use path inside a highway right-of-way is called a sidepath. A well-designed sidepath is wide enough for bicycle and pedestrian traffic, offers good separation from the roadway and appropriate sight lines at intersections. Sidepaths may be found in rural, suburban and urban settings.

At intersections and driveways, you’ll find the common conflicts with cars: hooks, crosses and drive-outs.

At signalized intersections, a sidepath will typically have a pedestrian signal. Beware of right-turning drivers who have the green light as well as those turning right on red from the cross street. Also, unrestricted left turns can lead to a high-speed surprise — especially when you are riding facing traffic. 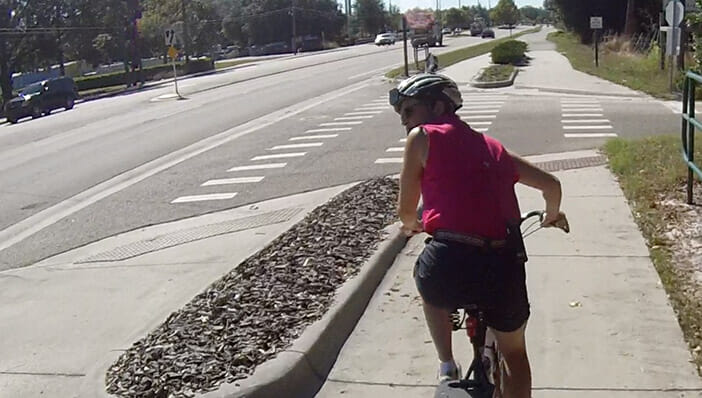 You will need to ride much slower on a path with frequent driveways than on a rural path. Each driveway crossing requires a 270° scan for conflicts.  Most of us are physically unable to perform a 270° scan while riding, particularly when slowing down for a possible decision to stop at the driveway.  Therefore, if you haven’t been monitoring for overtaking traffic behind your left shoulder (either with a mirror or with mid-block shoulder checks), you’ll need to stop to make a full, safe 270° scan.

Such a path may offer an enjoyable ride for someone who rides very slowly, but it requires more vigilance and a wide scan before crossing intersections and driveways.

As I noted in Part 1, most shared-use paths are closed from dusk to dawn, and aren’t lighted like roadways. But many paths are also transportation corridors. In winter, some commuters will use them in the dark. A good, bright headlight, aimed down toward the pavement, is essential to see surface hazards ahead of you. Don’t outride your light!

Personal safety is a concern on paths. As a small woman, I feel safer using roads at night when paths are nearly empty.

Also, as noted in Part 1, please do not place your headlight in flashing mode in the dark. It will not help you see hazards, and is a threat to people who are vulnerable to seizures.

Our shared-use path systems are expanding, allowing us miles of enjoyable cycling. As with road riding, knowing the potential hazards and how to avoid them will make your path riding even better. Have a great ride!

Courses
Teaching Adults How to Ride a Bicycle