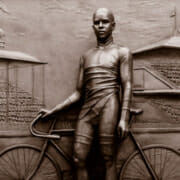 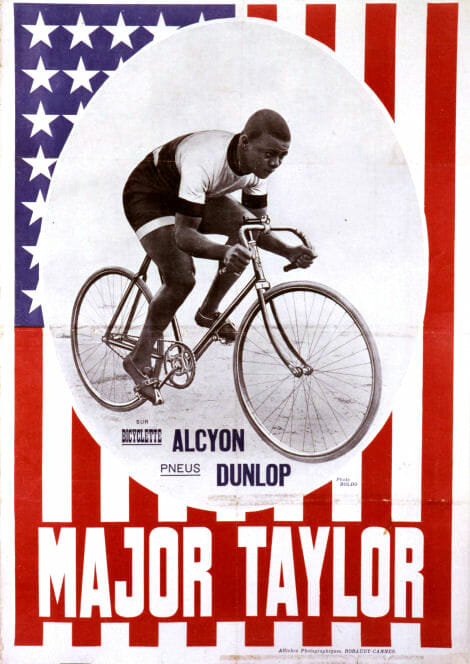 French poster, ca. 1901. In Europe, Major Taylor represented the wonder and promise of America, but fared far worse at home.

Savvy cyclists are served well by knowing and honoring our history.

This blog has already delved into how roads were redesigned for cars in the mid-20th Century. We’ve also honored John Forester, the pioneer in cycling education who passed in 2020.

Today we’ll look back at a man who changed the face of bicycle racing — and suffered unspeakable prejudice, innumerable indignities, and even death threats while doing so. 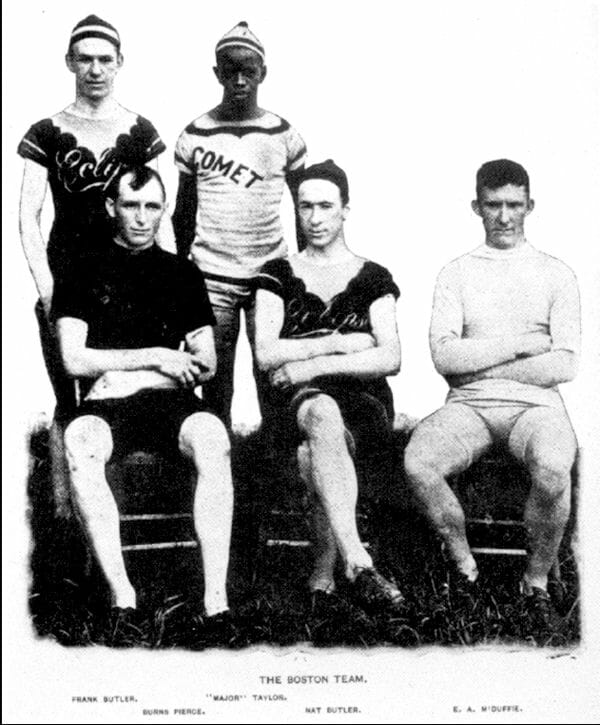 Boston Pursuit Team in 1897. This is one of the first known photographs of an integrated American sports team.

For a couple of decades around 1900, bicycle track racing was the most popular spectator sport in the United States and throughout the industrialized world. Its greatest hero was Marshall Walter “Major” Taylor, who became a professional racer in 1896 and was soon dubbed by newspapers the “most formidable racer in America.”

Major Taylor established seven world cycling records in 1898 and 1899. He toured throughout Europe and Australia, and was mobbed everywhere he went. He refused to compete on Sundays due to his religious beliefs. Even so, he consistently beat top champions on their home ground. In his 1902 European tour, Major Taylor won 40 of the 57 races he entered in Germany, England and France. His estimated net worth peaked at $100,000, or about $2.6 million in current dollars.

In renown and earnings, Major Taylor was the world’s first international athletic superstar. Yet as a Black man, he experienced deplorable treatment in the United States, his home country. Other racers would box him in or attempt, sometimes with success, to force him off the track or to crash. 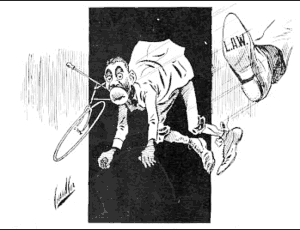 Caricature of Major Taylor in February 1894, illustrating the ban of Black people from the League of American Wheelmen.

At the conclusion of the Massachusetts Open in 1897, fellow racer William Becker tackled Taylor on the racetrack and choked him into unconsciousness.

Becker did this because he claimed Taylor had crowded him during the race. Becker received a $50 punishment for his actions and was allowed to continue racing.

Major Taylor could not race safely in the American South. While racing in Savannah in 1898, he received a written threat saying, “Clear out if you value your life.”

Major Taylor’s 450-page autobiography is easy to read, and remarkably free of bitterness as he regales the reader with his life story. Upon arriving in San Francisco by ship from Australia in 1904, he matter-of-factly describes “a new epidemic of Colorphobia which made me completely revamp my plans and leave California at the earliest moment.” 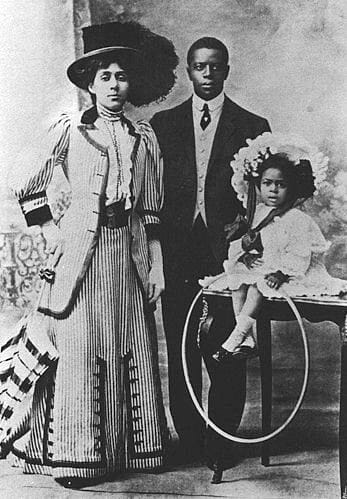 On that trip he was with his wife and infant daughter and accompanied by the reigning Australian racing champion. “Don Walker was completely nonplussed as he observed the treatment accorded to Mrs. Taylor and myself and our infant baby.”

Walker said to Taylor: “So this is America about which you have been boasting in Australia. From what I have seen of it in the past few days, I cannot understand why you were in such a hurry to get back home here.”

For his part, Major Taylor appears to have done his best to avoid animosity. He did not want hatred to become a cancer on his own soul. Instead, he kept hammering away at the promise of America.

“Judging by the manner in which colored athletes have repeatedly demonstrated their skill and prowess in the athletic world, it is quite obvious what might well be accomplished on a whole as a race in other pursuits of life if granted a square deal and a fair field,” Taylor wrote.

“We ask no special favor or advantage over other groups in the great game of life; we only ask for an even break.”

Track bicycle racing’s popularity declined, and the champions of its glory days faded in memory. Prejudice blocked Taylor from a second career as an engineer. He became impoverished, due to ill-advised financial investments and the 1929 stock market crash. In March, 1932, he died in Chicago at age 53.

In 1948, a group of former professional bicycle racers created a memorial for Major Taylor at Mount Glenwood Cemetery in Glenwood, IL. The plaque reads:

“World’s champion bicycle racer who came up the hard way without hatred in his heart, an honest, courageous and God-fearing, clean-living gentlemanly athlete. A credit to his race who always gave out his best. Gone but not forgotten.” 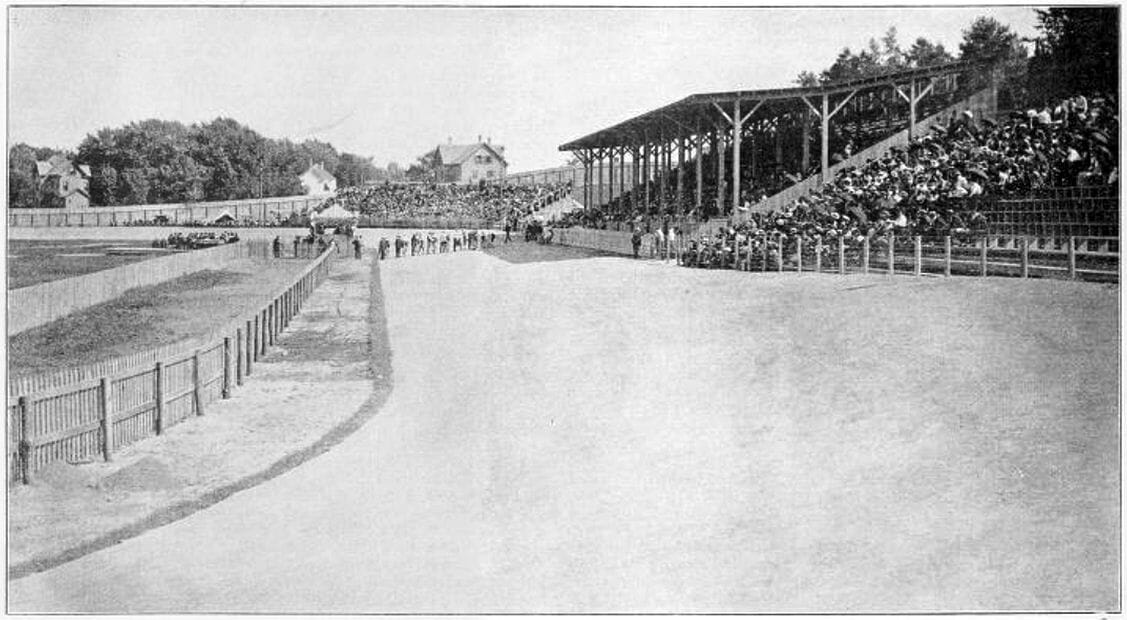 “What we do echoes through generations.” — Barack Obama

I am reminded of Major Taylor every time I ride my bicycle past Nipper Maher Park, the Little League baseball field a few blocks from my home in Waltham, Massachusetts. In Taylor’s time, it was Bicycle Park, a racetrack with a grandstand that seated thousands. Some of the foundation pillars still stand among the trees on the hillside behind the ball field.

Taylor’s story does not reach to the present time as one of loss. History has been far kinder to Major Taylor than were many of his fellow racers over a century ago. 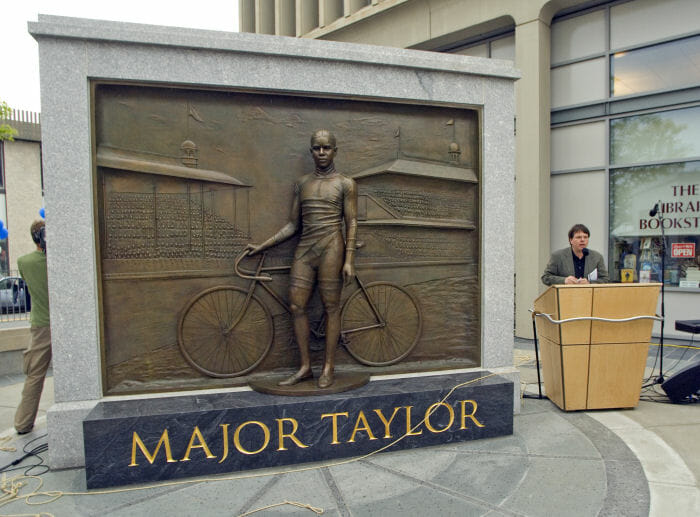 A revival of interest in bicycling has thankfully revived interest in him. Bicycle historians continue to uncover more fascinating details about his life. An imposing monument to Major Taylor stands now in Worcester, Massachusetts, where the “Worcester Whirlwind” made his home. And in his birth city of Indianapolis, the Velodrome is named in Taylor’s honor.

Go to the Major Taylor Association for more of Taylor’s remarkable, glorious and tragic story than I can tell in these few paragraphs. 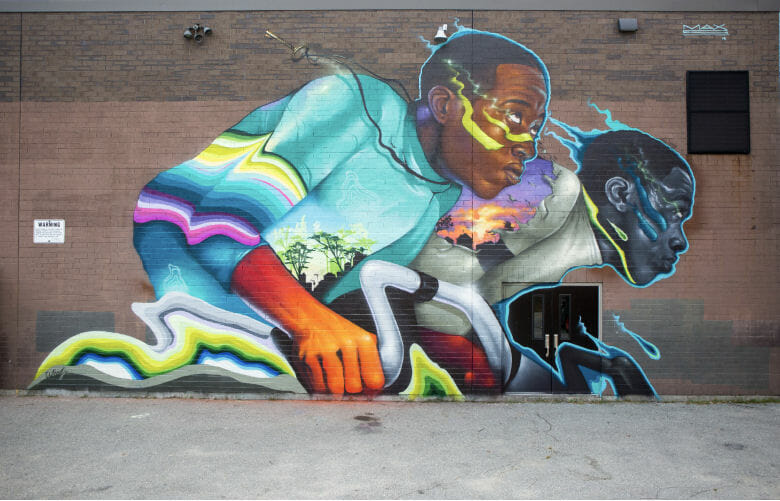 Max Sansing created this mural in Major Taylor’s adopted hometown of Worcester, MA. The “Worcester Whirlwind” is well known here, with the city’s major arterial road named in his honor.