The video above illustrates the safety concerns of cyclists using the road, and how the bicyclist’s position on the roadway can dramatically increase or decrease the most common crash types.

The Institute for Police Technology & Management is using the video in its “Pedestrian & Bicycle Safety High Visibility Enforcement” course commissioned by the Florida Department of Transportation. American Bicycling Education Association provided this video and other materials for the course.

In addition we welcome other training organizations and instructors to use this video to educate officers and motorists.

Chief Brett Railey is a curriculum developer and trainer for the Institute for Police Technology and Management. See what he had to say about taking a CyclingSavvy class. 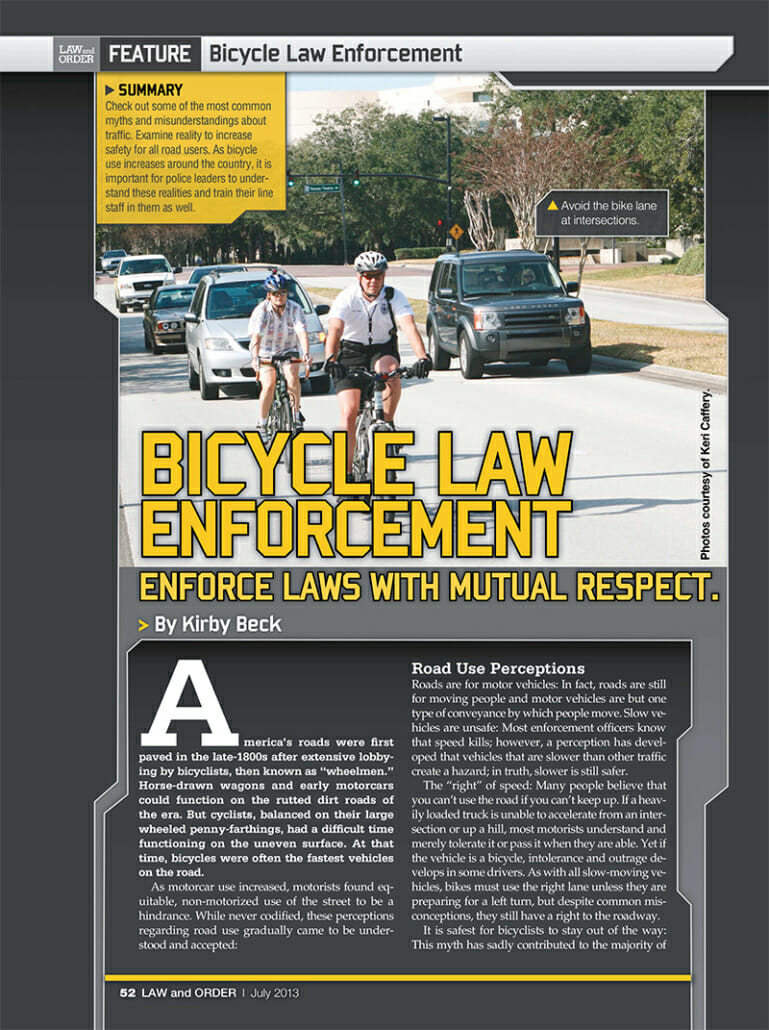 Some historical perspective by Kirby Beck. 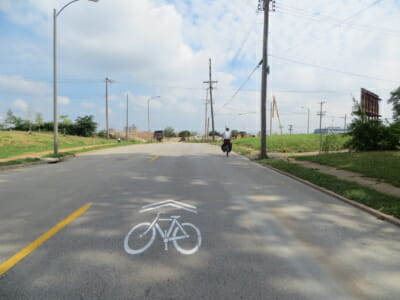 The legality of defensive driving

Bicycle-specific laws vary from state to state. A few states have no law governing bicyclist position within a lane. Others have a variation of a law known as “FTR” or far to the right. The language may vary slightly from state to state, but most are similar to the original UVC version:

a) Any person operating a bicycle or a moped upon a roadway at less than the normal speed of traffic … shall ride as close as practicable to the right-hand curb or edge of the roadway except under any of the following conditions:

b) Any person operating a bicycle or a moped upon a one-way highway with two or more marked traffic lanes may ride as near the left-hand curb or edge of such roadway as practicable. Same exceptions apply.

Below we’ll discuss each of the highlighted segments and how they relate to defensive driving.

Less than the normal speed of traffic

This law does not apply at all when the cyclist is traveling at the same speed or faster than the surrounding traffic. That scenario is actually quite common in urban areas and on congested roads.

NOTE: Impeding traffic statutes only apply to motorized vehicles in most states.

Capable of being done within the means and circumstances present. The conditions which make it not practicable can be fixed or variable. Who decides what is practicable? The person whose safety is at stake! Note, some states have changed this wording to “as close as is safe.”

The exceptions are numerous, and yet they are not exhaustive! They are examples of conditions under which it is not practicable to keep to the right. It’s worth noting that the text of the law itself is 53 words, while the exceptions are 106 words. That’s twice as much text dedicated to when the law does not apply! Taken as a whole, this is a tacit admission that it is rarely practicable to keep to the right.

Passing slower traffic should be done on the left. Many bicyclists pass on the right, and in some circumstances that is legal. Passing on the left is preferred because it is more predictable, therefore safer.

When preparing for a left turn

It is unsafe and illegal to turn left from the right edge of the road. The set-up for a left turn must be done in a manner that allows the cyclist to be predictable. Sometimes preparing for a left turn happens a considerable distance from the turn itself — this is especially true when multiple lane changes are required.

Again, this is not an exhaustive list. Most of the items are obvious. Some could use a little explanation. 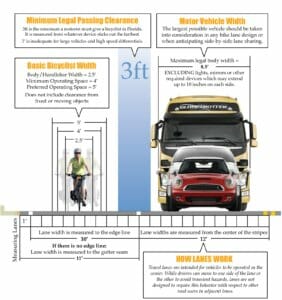 If ever there was a meaningless term, this would be it. For the purpose of this section, a “substandard width lane” is a lane that is too narrow for a bicycle and motor vehicle to travel safely side by side within the lane. Other than that, there is absolutely no concrete definition of a “substandard width lane” in traffic law or engineering standards. The most important thing is that the exception means bicyclists should not be expected to invite motorists to squeeze by in a space that is too narrow for safe passing. Since many states now explicitly define a minimum safe passing distance as 3 or 4 feet, we’ll use that here. A bicyclist’s minimum operating space (her width plus necessary lateral movement) is 4 feet. Normal width travel lanes are 10-12 feet wide. So that leaves 3-5ft. All cars are wider than 5 feet!

A few states (Texas, for example) have added a concrete definition of 14ft as a shareable width to their statute. This is problematic. Large vehicles, such as trucks, busses, utility trailers, and even pick-up trucks with extended mirrors can occupy as much as 10ft of lane space (mirror-to-mirror). Fourteen feet is not wide enough to share with those vehicles, especially at higher speeds.

What we have is an exception that is the rule. This exception alone makes this law irrelevant on the majority of roads in this country.

What about wide lanes?

So this law can only apply in wide lanes, or to roads with bike lanes (since they are part of the roadway). We need to consider other factors of practicability and defensive driving.

“Parked vehicles” includes the distance from the swing of the door. On streets with parking, a cyclist should choose a predictable line 5 feet or more from the parked cars. There could be 15 or 16 feet between the parked cars and the lane line, but 5 of those feet are deadly hazardous and therefore unusable. That narrows the actual usable lane to 10-11ft. Since that width is not shareable, the cyclist must then move far enough left to discourage close, in-lane passing. Unfortunately, this safety concern applies whether or not a bike lane is painted in that space. Bike lanes next to onstreet parking are entirely within the door zone. Paint does not prevent people from opening car doors without looking.

Pavement quality is another consideration. If the right side of the road is riddled with potholes, debris or other hazards, it is not usable space. The width of the usable space determines where the cyclist should ride. 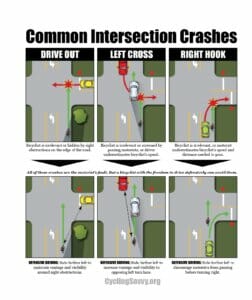 Contrary to the common fear of being hit from behind, intersections (and driveways) are actually where most cyclists are hit. Those crashes result from motorists turning or crossing in front of the cyclist. Regardless of lane width, intersection conflicts require a defensive driving approach that gives the bicyclist visibility to be seen by other drivers, vantage to see potential conflicts, and maneuverability to avoid motorist mistakes. All three intersection crash types can be mitigated (or even prevented) by the cyclist moving into a left-of-center position. Alignment with where a car driver would sit offers the best vantage and visibility to avoid screens and obstructions. It’s no coincidence that this same position is taught to motorcyclists. 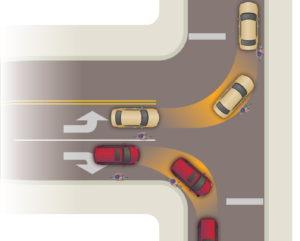 Whether a right turn lane or a left turn lane, it’s critical for a bicyclist to control the lane throughout the turn. Large vehicles off-track, and many motorists inadvertently drift in turns. Sharing a lane of any width through a turn is very risky. That is why exception #4 exists. Control of left turn lanes is expressly permitted via a different statute.

Bicyclist may use either outside lane on a one-way street. The same exceptions apply. In addition, the existence of a bike lane on one side of a one-way does not preclude the use of the other outside lane. Put simply, it makes no sense for a cyclist to cross lanes of traffic twice if her entry point and destination are on the other side of the road from the bike lane.